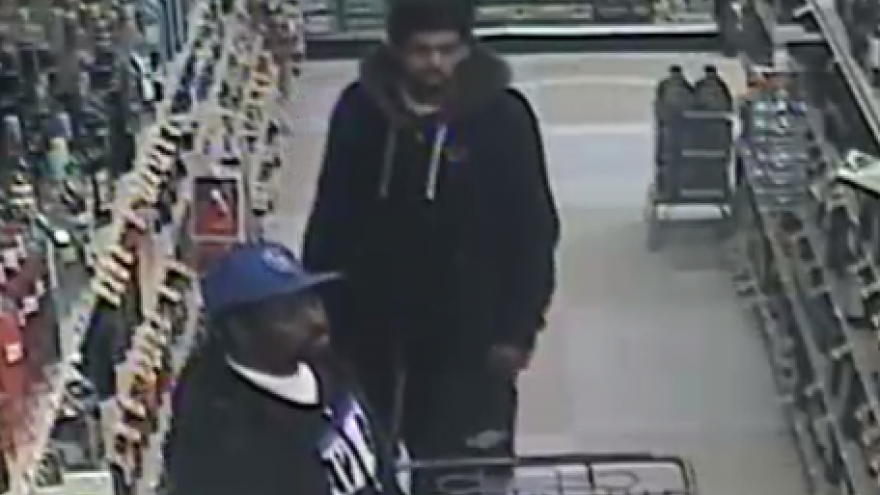 Brookfield Police are looking for two men who brazenly shoplifted over $150 worth of alcohol from a Pick N Save store on W Capitol Drive.

According to the Police, the men entered the store around 6:40 PM on April 11 and went to the liquor department.  The first suspect selected four bottles of single malt scotch whiskey and placed them in a shopping cart.   He then walked away from the cart and the second man took the bottles from the cart, stuffing two of the bottles in the waistband of his pants.   He put the other two bottles in a black bag and then left the store.   The first suspect left soon after.   The type of vehicle the suspects left in is unknown.

The first suspect is described as a black male,  30- to 40-years-old, approximately 5'10" tall, and weighing approximately 200 pounds.   He was  wearing a blue baseball hat, black jacket with writing on the back, and acid wash jeans.

The second suspect is described  as a black male, 25- to 35- years-old, approximately 6'1" tall, and weighing approximately 200 pounds.   He also has a short Afro, facial hair, and was wearing a gray hoodie under a black jacket, and black baggy pants with writing on the left pant leg.

Anyone with information on either of the suspects, is asked to  contact Officer Stubblefield of the Brookfield Police at stubblefield@ci.brookfield.wi.us or call 262-787-3702.