'Broken system': $3.8B surplus could help local governments, lawmakers at odds on how to spend it

’Broken system’: $3.8B surplus could help local governments, lawmakers at odds on how to spend it

MADISON, Wis. (CBS 58) -- State lawmakers remain at odds over how to spend a projected $3.8 billion surplus Wisconsin is expected to see by July 2023. It's $2.9 billion more than what lawmakers were expecting to receive.

During a Wisconsin Counties Association panel, legislative leaders on both sides of the aisle made it clear they're far from reaching a compromise on what to do with all that cash.

Republicans have suggested a tax cut, but not until next year when they begin crafting the state budget. Senate Majority Leader Devin LeMahieu (R-Oostburg) said he doesn't want to spend those funds until they know for certain the money will be there.

"Spending a projected surplus at this point, when we don't know if it will materialize or if our revenues will start going down a year and a half out, I think makes absolutely no sense," LeMahieu said.

Democrats are backing Governor Tony Evers' plan that includes sending a $150 refund check to every resident, and investing a portion of the surplus into education and child care.

During the panel discussion, LeMahieu rejected the proposal shortly after it was released and reaffirmed it will not be brought to the floor for consideration.

"I would love to see more resources for local government in some way -- counties, towns and villages are suffering so much," Bewley said.

Using a portion of the surplus to invest in local governments could help them address funding issues, according to a report by the nonpartisan Wisconsin Policy Forum.

“The state’s unprecedented fund balances and surging tax collections may now offer the best opportunity in decades to reconsider the local government revenue structure and ensure appropriate capacity for the delivery of vital services by county and municipal governments across Wisconsin,” the report stated.

The report also said Wisconsin has "fallen beneath the radar" over the last several years because municipalities are essentially spending more with less resources.

The League of Wisconsin Municipalities said in a statement the Wisconsin Policy Reform report proves now it's the right time to address the "broken system for funding local government."

"Our municipalities are doing more with less and making difficult budgeting decisions, but without fixing a broken system, they are struggling to provide needed services such as public safety…failing to provide local municipalities with the help that they need to keep their residents safe and provide essential services would be a significant missed opportunity."

Local governments are unable to tax income or raise sales tax without lawmakers' approval. Milwaukee County Executive David Crowley said raising the sale tax to 1% would allow them to generate about $160 million.

"There is a huge need right now, when you look at the fiscal cliff we're going to be seeing in the next couple of years," Crowley said. "We're faced with decisions about where we have to cut from, we don't want to cut from criminal justice and mental health programs." 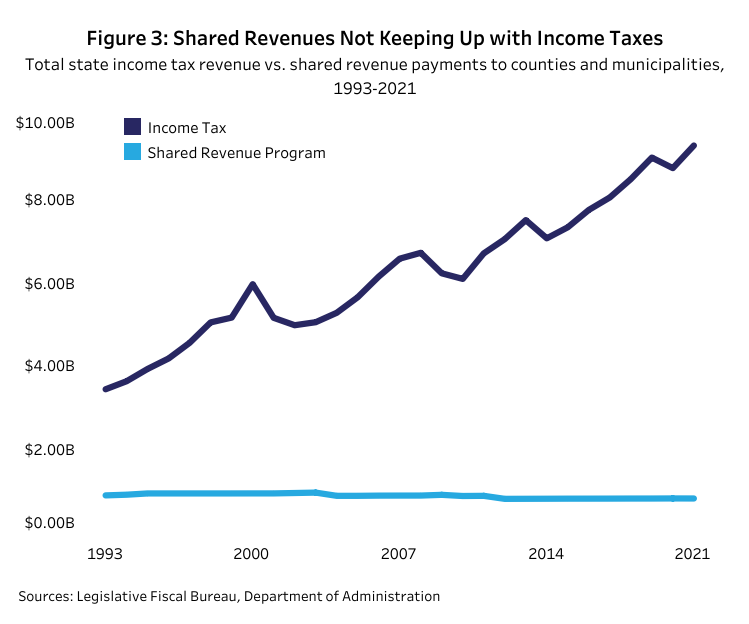 Many local and county officials are also begging lawmakers to raise shared revenue so places like Milwaukee can get more money to fund essential services such as police and transportation. Shared revenue is the largest funding source provided by the state.

"We need to challenge the Legislature and ourselves to really focus on a solution that matches the scale," said Crowley.