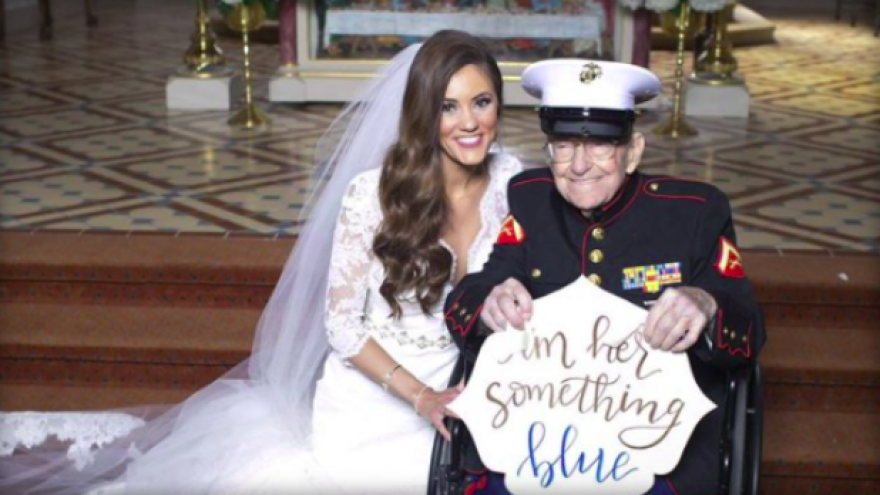 CBS NEWS - Bill Lee Eblen was propped up in his hospital bed recovering from a recent bout with pneumonia when he cleared his throat to ask a nurse if he'd be healthy enough to meet his goal.

"What's your goal?" the nurse asked.

"To be her 'something blue' on her wedding day," the 92-year-old replied, pointing to his 30-year-old niece, Alison Ferrell, who was standing in the corner.

Weeks later, on May 13 at a church in Cape Girardeau, Missouri, Eblen was able to meet that goal.

Sitting in a wheelchair, he was the first to be escorted down the aisle at Ferrell's wedding ceremony, proudly holding a sign in his lap that read, "I'm her something blue."

Guests peeked over the pews to catch a glimpse of the smiling veteran as he approached a teary-eyed bride and her 34-year-old fiancé, Matthew.

It was a moment Ferrell will never forget.

Ferrell grabbed her uncle's hand as he was seated next to the altar, and he gave it a little squeeze.

"It was kind of like him saying, 'I'm here and I wouldn't miss this,'" Ferrell said.

Ferrell comes from a "close-knit" family. Her mom is the youngest of 14 children. The oldest child married Eblen, making him her uncle.

"We live close to each other and are lucky enough to spend a great deal of time together," she explained. "I show him how to work Facebook and he tells me war stories — pretty cool trade if you ask me."

Eblen didn't seek the spotlight on Ferrell's big day, but it was hard not to notice the pride running through his veins. To Ferrell, his presence was the best wedding gift she could have ever been given.

"It brought me a lot of joy to see him in his dress blues and so happy on my wedding day," she said. "He makes me incredibly proud and I feel very honored to be his niece. He is an American hero in our family."