Brewers to play exhibition in Biloxi on April 2nd 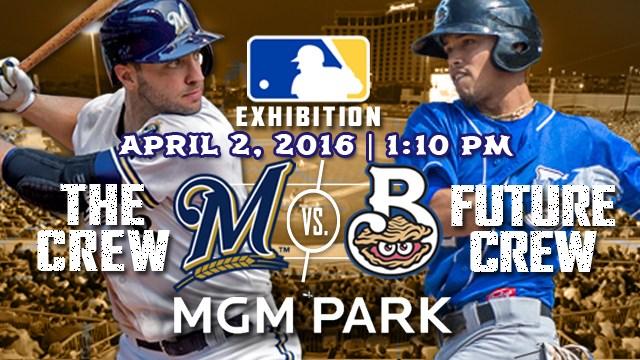 The Milwaukee Brewers announced today that the team will close the Spring Training schedule with an exhibition game against their Double-A affiliate, the Biloxi Shuckers. The game will take place on Saturday, April 2 at 1:10 p.m. CT at the Shuckers new ballpark, MGM Park.

“We appreciate all of the work that (President) Ken Young, (General Manager) Buck Rogers and the entire Shuckers staff do to provide a first-class home for our Double-A club,” said Brewers General Manager David Stearns. “MGM Park is a state-of-the-art facility and 2015 was a terrific first season there with the team advancing to the Southern League Championship. We look forward to the Major League club visiting next year and to many more seasons of a great partnership between our organizations.”

This is the first time the Brewers will play in Biloxi. It is the first time a Major League team has visited the Gulf Coast city since the 1935 Washington Senators held Spring Training at Biloxi Stadium, which is now the site of Keesler Air Force Base.

“Having our Major League affiliate come to play the Shuckers is a very special event for the entire community,” stated Biloxi Shuckers President Ken Young. “Fans will be able to get to see Major Leaguers up close and will have a chance to interact with them as well. Starting our second season by playing the Brewers is a terrific way to continue the momentum from the 2015 campaign.”

The Brewers will announce their complete Spring Training schedule at a later date. Milwaukee will open up the regular season on Monday, April 4 at Miller Park against the San Francisco Giants.