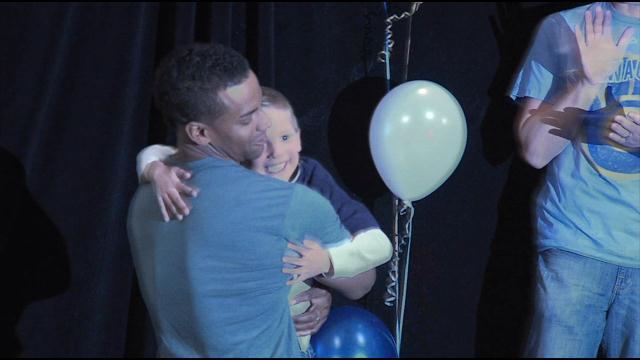 \"Our Stories with Michele\" is a regular feature on the CBS 58 News at 4 p.m. The segments shine a light on people doing good works in the community to give us a complete perspective of the place we call home.

\"One of the biggest challenges is that we couldn't let him cry like a normal baby,\" recalled father Chris Van Asten.

The Children's Miracle Network hosted a Brewers theme tailgate at the Marriott Hotel in Waukesha.

Little Pearce thought it was just to announce that he had been named the ambassador of Children's Hospital of Wisconsin.

But Davis who had been hiding in the kitchen emerged to give the boy a big hug and tell him he would be declaring \"play ball\" at Miller Park on Friday night.

The pair embraced for a long time, Davis picking up Pearce into his arms, cheek to cheek they smiled as family, friends, and medical staff cheered them on and took pictures.

\"It's just too much to take in because of what he's been through and what we go through is completely different. He just gives us a special energy,\" said Davis.

Despite having his family as the Brewers team's special guest, Pearce said what he looked forward to most is a Brewers win.

So while some may complain about the slow start to baseball this season in Milwaukee a little boy from Greenville is showing us all how to find victory in the game of life.

The Children's Miracle Network Hospitals Champions program presented by Delta Air Lines, Marriott International and Chico's FAS identifies a child from each state, Washington, D.C. and Puerto Rico with a remarkable medical story and passion for advocating on behalf of children's hospitals.

These Champions will travel to Washington D.C. in June to share their stories with a national audience. Each child serves as an ambassador for the 62 kids treated every minute at 170 member Children's Miracle Network Hospitals.

Since 1983, Children's Miracle Network Hospitals has raised more than $5 billion, most of it $1 at a time through the charity's Miracle Balloon icon. Its various fundraising partners and programs support the nonprofit's mission to save and improve the lives of as many children as possible.