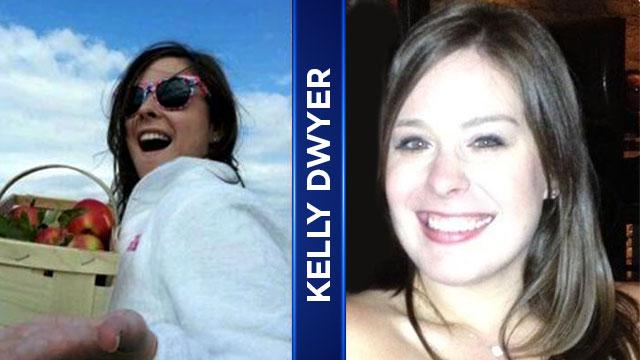 ?Jefferson County has positively identified the remains as Kelly Dwyer.

In a statement made on the Find Kelly Dwyer Facebook page the family said:

\"It is with heavy hearts that we announce that we have found Kelly. The medical examiner has confirmed the body found on Friday, May 1,    2015 is, in fact, Kelly. Please be respectful of the family at this private time.\"

The remains were found by a citizen along Inlynd Rd in the Town of Sullivan on May 1.

\"As chief deputy you're familiar with these cases as they area out in the community, on the other hand you're sensitive to all the other families who having missing wives, children and aunts, you're doing the best you can to gather information as diligently as possible and in the end working to who is this person what can we do to resolve this case,\" said Nichol Wayd, Jefferson County medical examiner, at a press conference.

\"I can't even begin to put myself in that's family's shoes it must be terrible the only positive from today's meeting is that we can give that family some closure and move on with part of the healing process in their lives,\" said Nichol Wayd, Jefferson County medical examiner, at a press conference.

The investigation into the circumstances surrounding her disappearance and the cause of her death remain under investigation by MPD and authorities in Jefferson County.

No clothes were found on or near the body.

Exactly how long Dwyer's body was outside is unclear, but the Jefferson County medical examiner admitted at the press conference the elements make analyzing it difficult.

In the end, dental records given by the family helped ID the missing 27 year old.

But one question remains, how did Dwyer die?

In order to get a better idea if there were any injuries Jefferson sent her to a forensic anthropologist in Texas. There the anthropologists will do analysis to see if there are injuries, according to Wayd.

It is unclear how long it would be before we have answers on a cause of death.

Dr. Fred Anapol with the UW Milwaukee's Center for Forensics Science says that it can be difficult to determine cause of death with a body that's been potentially decomposing for the last 18 months.

\"I don't know how much can be done scientifically. I don't think any forensic evidence is on the body leading to the person who committed this crime,\" Anapol said.

Kelly has been missing since October of 2013.

Investigation continues into her death

She was last seen with Kris Zocco, who police named a person of interest in her disappearance.

Kris Zocco is currently in Dodge Correction for possession of child pornography and drugs.

\"This has been in the news for the last year and half the biggest thing we want to express is that this will be a collaborative process. Milwaukee Police Dept and cold case unit has been involved a long time and we're going to work with them to bring the Dwyer family justice,\" said Susan Happ, Jefferson County District Attorney, during a press conference.

\"There is still work to be done before [justice] can be accomplished. Now that medical examiner has identified the body, our next step is to examine it to determine cause and manner of death and any other evidentiary material we can retrieve from the remains,\" Milwaukee Police Chief Ed Flynn.

Chief Flynn said he would not discuss if Kris Zocco remains the only person of interest in the case.

The chief did say discovering and identifying Dwyers Body opens up all new avenues into this death investigation.

There will be a vigil tonight at 7pm at the lakefront.

The family has been working with a private investigator that said April 29 he uncovered some new information in the case.

In April they were using private search groups in three areas outside the city of Milwaukee, within about a 45 mile radius, by land and water.

In November, Milwaukee Police Department searched the Menomonee Falls landfills for evidence or remains.  In November, the family also put up billboards to attract attention to the case.

Also in November, Milwaukee County unsealed the affidavit for the search warrant that led to the search of Kris Zocco's apartment on Milwaukee's east side. The affidavit detailed how Kris Zocco, the last person to see Kelly Dwyer, claims his last night with her went.

The affidavit says 39-year-old Kris Zocco told police 27-year-old Kelly Dwyer visited him at his apartment on the 2000 block of N. Prospect Ave. He said she came over to party, which typically included drinking alcohol, using powder cocaine and engaging in sex acts.

Zocco says Dwyer came to his apartment around 10:00 p.m. on October 10th. He claims she called a drug dealer named \"Tone\" to see if he could supply her with an eight ball, a street term for over three grams of cocaine. Zocco told police he usually pays for the cocaine Dwyer buys from Tone. He says the two of them walked to an ATM to get the money, and then drove to Tone's residence near the intersection of E. Pleasant St. and N. Water St.

According to the affidavit, Zocco claims he gave Dwyer the $300 to pay Tone. Zocco says he and Dwyer returned to his home to do lines of cocaine, smoke marijuana and drink vodka.

Zocco told police Dwyer changed into a dress before going to a bar in the area. Police say video surveillance shows Dwyer leaving Zocco's apartment for the bar wearing the same clothing she originally arrived in.

Zocco alleged he and Dwyer woke up in his apartment around 9:00 a.m. on October 11, 2013. He says she told him she was leaving and heard the door click behind her. Police say surveillance video did not show Dwyer in any part of the building or exiting the building like Zocco claimed.

The affidavit says Zocco told police he left the next day to take his summer equipment to his parents house in Richfield. He says he left at 6:35 p.m. and returned the same day at 8:45 p.m. Police say surveillance video shows Zocco getting into his car at 6:15 p.m. and returning the next day around 2:15 p.m.