BREAKING: Arrest made in 1990 homicide of Sturtevant native Berit Beck 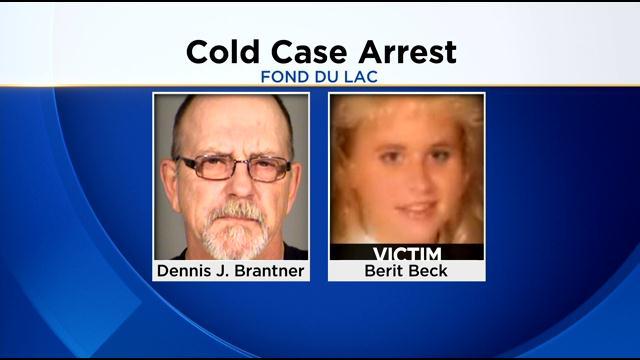 Beck had just graduated from Racine Case High School back in 1990 and was on her way to Appleton to take a computer course when she disappeared.

Her body was then found several weeks later in a ditch near Waupun. Officials say she died from strangulation. Berit Beck's family has been notified of Brantner's arrest.

Berit's parents Dave and Diane, their son Ben, and the Beck family have issued the following statement: “We are encouraged and relieved for this day to have arrived for Berit and our family. We request that our privacy be respected as this process unfolds.”

The Fond du Lac Sheriff's Office has scheduled a press conference for Monday, March 30th at 11 a.m. where they will provide the latest information.

\"Everybody was really devastated”, said Sturtevant resident Nancy Hardmann. “She was a sweet girl.\"

Beck grew up in the village of Sturtevant.

\"The family is good people”, said Hardmann. “Sturtevant people are family oriented. We're one big family. Everybody knows everybody. That was very devastating. Finally there is a closure.\"

Beck had just graduated from high school on her way to Appleton to take a computer course when she disappeared.

Her van found two days later in a Kmart parking lot, and her body several weeks in a ditch near near Waupun.

Mike Harmann and his wife Nancy say the 25-year-old cold case has been difficult on the small community.

\"A lot of talking frustrated. People very frustrated”, said Sturtevant resident Mike Hardmann. \"It's closing. They thought they had the case solved a few years ago but it slipped through is good is finally it's done.\"