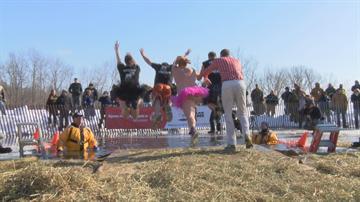 MUSKEGO -- The chilly air at Muskego County Park was filled with shouts of fear, encouragement and a lot  of shivers Sunday, but jumping into icy water has become a yearly tradition raising more than six figures for people that need it the most.

\"Yeah, it hurt,\" laughed another jumper.

You know the saying: no pain, no gain.  There was plenty of icy-cold pain to go around in the water.

Muskego High School Associate Principal Ken Dunbar was one of 400 plungers helping raise money for the Special Olympics of Wisconsin.  His students gathered more than  $1,000.

\"Great time and the smiles on their faces says it all, the kids and the staff here just tremendous,\" a shivering Dunbar said.  \"Did a great job.\"

The Special Olympics Polar Plunge is in its 14th year in Muskego.

\"It's hard to raise money, it's hard to ask for money and people come up with  thousands of dollars to do this,\" Regional Director of Development Kelly Lang said.

\"[Jumping in] is not something that you want to do, but people are raising a ton of money in order to do this for a really good cause,\" Lang said.

Some jumpers needed more encouragement - and layers - than others.  But not so for Muskego Moose Lodge Governor Thomas Kronenburg.  A friendly wager called for him to wear a tutu and moose hat if he collected $500.  He raised $961 in just four days.

\"The chance to turn around and give people the abilities and options to get the  chances that everyone else has because they deserve it,\" Kronenburg said.

\"It's really an awesome feeling knowing I'm helping,\" Team Franklin member Christine Niemiek said.  Her group raised about $6,000.  \"It may be a little but it's  something and every little bit counts.\"

If you missed Sunday's plunge but still want to help out, the Special Olympics is  holding another plunge at McKinley Marina along Milwaukee's lakefront February 15th  Registration details can be found under the News Links tab.