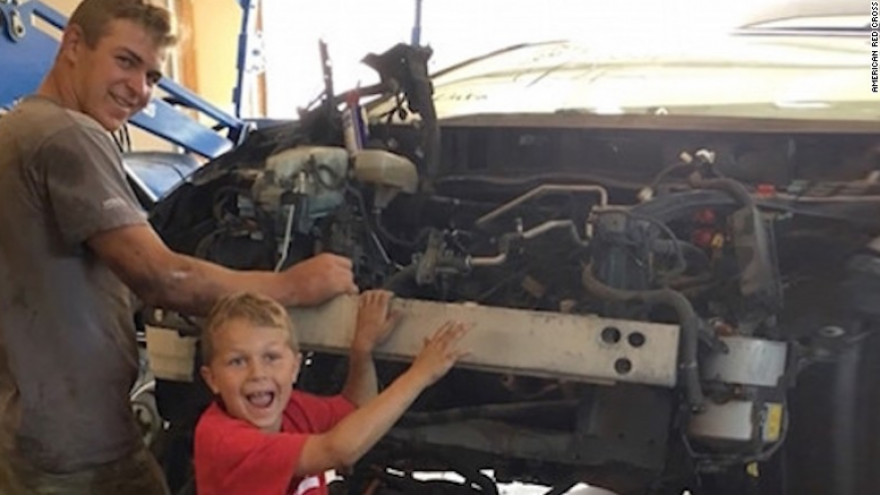 (CNN) Asked how he somehow gained the strength to free his father from being crushed by a car, little J.T. Parker has a ready answer.

Now the 8-year-old Idaho boy is being honored for his Herculean efforts. Last week, the American Red Cross of Greater Idaho presented J.T. with one of its 11 "East Idaho Real Heroes" awards for 2017.

It happened last summer while Stephen Parker and his sons, J.T. and 17 year-old Mason, were working on a Toyota Prius at their home in Sugar City, Idaho, according to EastIdahoNews.com.

Mason had gone inside after cutting his hand, and when Stephen went to adjust an axle, the car collapsed on him. J.T was the only one around who could hear him.

"I yelled to J.T. on the other side of the car, 'Jack it up quick! Jack it up quick!'" Stephen recalled. "I couldn't move at all. I was totally trapped, and then I passed out. It was all in his hands, and I thought, 'This is it. There's no way he can jack up this car because it took my 17-year-old son and I both to jack it up the first time.'"

But that wasn't going to stop J.T. from trying.

After adjusting the car jack, J.T. began jumping up and down on the jack's handle. And even though he only weighs 50 pounds, the car began to slowly rise off of his father.

In the 911 call recording, Mason can be heard telling his father that he needs to keep breathing.

"I can't," his father responds.

Stephen Parker was in critical condition when a helicopter flew him to Eastern Idaho Regional Medical Center. He had 13 broken ribs, but no internal damage.

Once they'd returned from the hospital, Stephen asked J.T. to try to jack up the car once more. But the boy didn't have the superhuman strength anymore.

When asked how he did it, J.T. responded, "Angels."

"This whole thing is a miracle. There's no other way to describe it," said the boys' mother, Jodi Parker. "There's no way that little boy could have done that. I just felt that it was a responsibility we now have to tell people that miracles still exist."