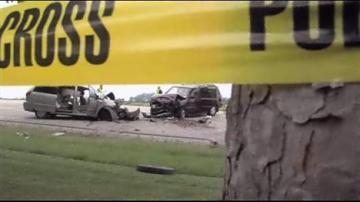 CALEDONIA -- A 'dangerous road,' that's what a Caledonia Police Officer told us about Highway 38 after covering a head on collision last week. For this 'Bottom Line' report we combed through accident records to uncover safety risks on Highway 38.

Caledonia Police see the dangers of Highway 38 first hand. Officers showed us a video of a car, out of control, narrowly missing a squad car before crashing into a ditch.

Resident Phil Westberg, who lives off the highway, often witnesses the accidents.

\"You hear a crash, and vehicles are scattered.\"

He says the two lane highway has several hidden dangers, \"It's so hilly people come up to the stop sign so quick and people don't see them.\"

He says the 55 mile an hour speed limit is also an issue when he's trying to turn into his home.

\"Driveways are hard to get into sometimes because they travel too close to you.\"

Caledonia Officer Brian Wall first told us about the issue at last week's head on collision at Highway 38 and Brooke Road, that sent four to the hospital.

Wall says, \"They were in such condition that we wanted flight for life to take the patient.\"

Officer Brian Wall says, the road has concerned him for decades.

Officer Wall says, \"Scars are up and down this road, in my 25 year career here, there have been a dozen fatal accidents in this half mile area.\"

We pulled accident reports dating back to 2009 and found at least 30 accidents where drivers lost control and in some cases had an incapacitating injury, and needed medical transport.

\"We routinely get very serious accidents right here at this location.\"

Officer Wall and our resident Westberg, both, would like to see changes.

Westberg says, \"I'd like to see it at two lanes, but maybe put the speed-limit down.\"

We reached out to the Department of Transportation and are waiting for a comment.