Boston cop who helped save comrade is shot in the face 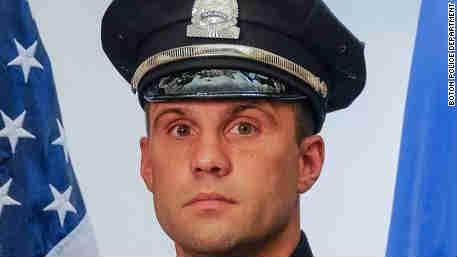 (CNN) Police officer and former U.S. Army Ranger John Moynihan was honored at the White House less than a year ago as one of the nation's \"Top Cops\" for helping to save a transit officer wounded in a gunbattle with the Boston Marathon bombers.

On Saturday, Moynihan, 34, was in a medically induced coma at a Boston hospital after being shot in the face at point-blank range in the city's Roxbury neighborhood the night before. The gunman was shot and killed.

Moynihan was in critical condition at Boston Medical Center, where relatives, other officers and members of the clergy gathered Friday night to pray for his recovery.

A six-year police veteran and member of the youth violence task force, Moynihan was shot below the right eye. The bullet lodged behind his right ear, Evans said.

In April 2013, Moynihan was among officers who helped save transit officer Richard H. Donohue Jr., who was shot during a gunfight involving Tamerlan and Dzhokhar Tsarnaev in the days after the marathon bombings.

Police fired nearly 300 rounds within five to 10 minutes. One round nearly killed Donohue.

Moynihan and other Massachusetts officers were cited for their \"heroic and relentless\" life-saving measures on Donohue, who nearly lost his entire blood volume on the Watertown street.

An officer pressed against Donuhue's chest. Another forced air into his lungs. The wound near his groin was too high for a tourniquet.

A 33-year police veteran, Donohue was pale and appeared dead as four officers laid him on a gurney.

\"He was essentially dead,\" said Dr. Heather Studley, who took over his care at Mount Auburn Hospital in Cambridge.

Tamerlan Tsarnaev was killed that night; his younger brother is on trial now in a federal death penalty case in Boston.

At a White House ceremony last May, President Barack Obama honored Moynihan and 52 other officers as \"America's Top Cops.\"

\"There are officers here who were in the thick of two attacks last year: the shooting at the Washington Naval Yard and the bombing at the Boston Marathon,\" Obama said at the time. \"On those awful days -- and we all remember them -- amid the smoke and the chaos, the courage of these officers shone through. And their quick thinking and level-headedness undoubtedly saved lives.\"

\"John played a part in saving my life, and that's something I will never forget,\" Donohue said. \"His record of service speaks for itself. Everyone is wishing him well and we know he has the strength to pull through.\"

At 6:40 p.m. Friday, Moynihan and other officers pulled over a car in an area where gunshots had been reported earlier, Evans said. The primary job of the task force, also known as the gang unit, is to remove guns from the streets.

Six officers in separate cars, sirens blaring, were involved in the traffic stop, which was captured by surveillance cameras in the area.

Moynihan walked up to the driver's side door. A man started to step out.

'Point-blank in the face'

\"Without provocation, as the driver is getting out ... you can see his right arm come up point-blank and shot officer Moynihan right below the eye,\" Evans said.

Evans described the officers approach as \"very low key\" and said they weren't \"even close to having their guns out.\"

After shooting Moynihan, the suspect ran, turned around and fired at the other officers -- emptying his .357 Magnum, according to Evans.

Evans said a middle-aged woman was who driving by at the time suffered a flesh wound in the right arm. She was not identified.

The shooter, identified as 41-year-old Angelo West, was shot and killed. Evans said West had several prior gun convictions.

Two passengers in the car were arrested on unrelated charges involving an outstanding warrant and a probation violation.

Officer is 'a tough kid'

At a news conference, Evans and local leaders sought to allay community concerns at a time when officer-involved shootings have led to protests throughout the nation. Moynihan is white; West was black.

\"Our officers did what they had to do,\" the police commissioner said.

The Rev. Mark Scott of the Black Ministerial Alliance of Greater Boston said Moynihan was shot \"assassination-style.\" He called for calm in the predominantly black Roxbury section.

\"This is not about 'Black Lives Matter,'\" he said, referring to a protest movement that emerged after the shootings. \"It's about all-the-lives-in-the-community matter and it's about the police ... responding to a concern from the community.\"

Evans said 1,071 guns were taken off the streets in Boston in 2014, with the youth violence task force and other units helping to seize more than 700.

Moynihan is a decorated Army Ranger with stints in Iraq from 2005 to 2008, according to the police department.

He won the Boston Police Department's Medal of Honor in 2014. His girlfriend and family have been at his bedside.

\"They worried about bleeding in and around his brain,\" Evans said. \"They're watching him closely ...and want to see how he's progressing before they make any determination of whether to have surgery. He's a tough kid.\"