Border bar on the front lines of Packers/Bears Rivalry 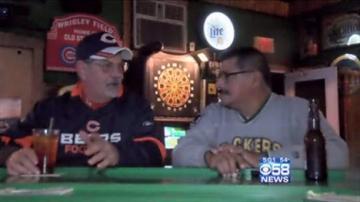 KENOSHA-The rivalry between the Packers and the Bears started in 1921.

That was long before James Davidson and Dan Llanes became friends. And old time loyalty is hard to break.

One is a Bears Fan, the other roots for the Packers and on night's like Monday night  they gather at Spanky's to watch these familiar foes play each other.

\"I don't hold it against him,\" Davidson says of his Packers loving friend.

Pamela Burt who works at Spanky's says it's a fine line they have to walk when catering the crowd on a night like this.

\"It's going to be packed, half Bears and half Packers.\"

Already folks started coming in around the dinner hour. Plenty of laughter, for now. When the game's on, it'll be a different story.