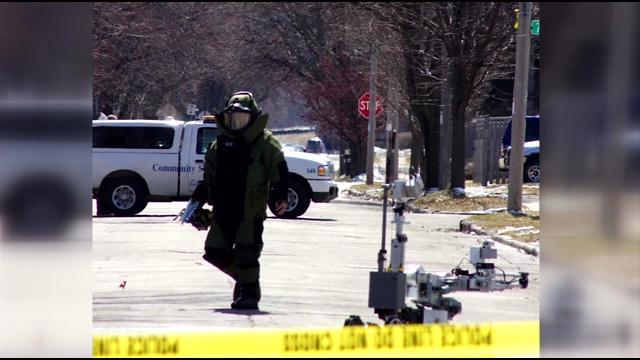 A strange package placed outside a Planned Parenthood in Kenosha brought out the bomb squad Friday afternoon.

Burke-Hoel was relaxing at home nearby when curiosity kicked in.

\"I looked outside my front door and sure enough, there were police all over the place,\" Burke-Hoel said.

Burke-Hoel watched the Kenosha bomb squad closely observe the package sitting outside the clinic. Police say it was a small cardboard box sealed with duct tape. The box had a message written on it but police couldn't identify what it said.

The Kenosha bomb squad scanned the package, didn't find explosives, but detonated it to be safe.

The box was filled with packs of birth control pills. No one was injured, but a door on the Planned Parenthood said the clinic would remain closed Friday and reopen Tuesday.

\"Nothing really surprises me in this town anymore,\" Lapoint said. \"I just hope that everybody else was safe.\"

Burke-Hoel says he sees protesters outside the Planned Parenthood frequently, but they're usually only carrying signs and remain peaceful.

\"That isn't right,\" Burke-Hoel said of the package. \"It's pretty inhumane to do that.\"

Lt. Rombalski says Kenosha police are putting a detective on the case to figure out who left the package. Rombalski says they contacted mail carriers and parcel companies, but none of their workers left an unattended package.

If you have information about the package, call Kenosha-Area Crime Stoppers at 262-656-7333.