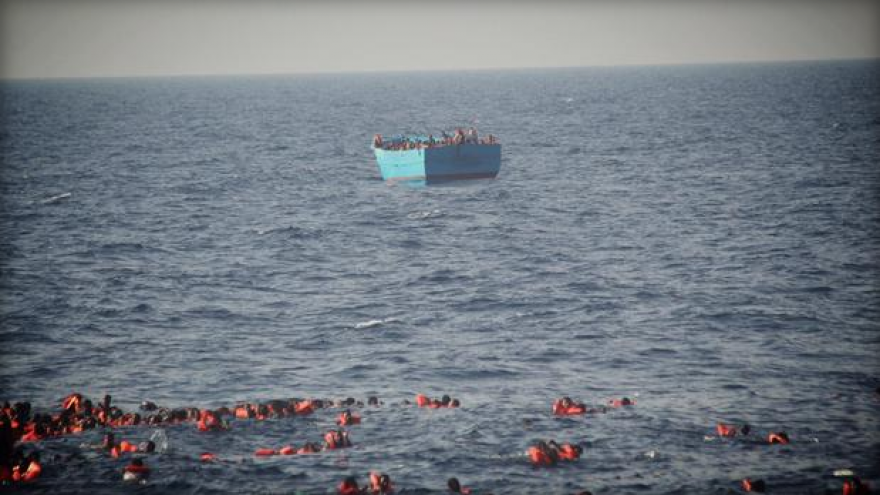 ROME -- The bodies of at least 34 migrants, many of them young children, were recovered from the sea off Libya after some 200 migrants tumbled into rough waters when their overcrowded smugglers' boat capsized Wednesday, the Italian coast guard said.

"Many of the bodies are small toddlers," tweeted Chris Catambrone of the non-profit group Migrant Offshore Aid Station (MOAS), which was helping in the rescue effort.

MOAS tweeted photos showing survivors in orange life vests bobbing in Mediterranean waters as they awaited rescue. Catambrone said commercial vessels and the British and Italian navies were assisting in the operation.

"The immediate intervention of the coast guard boat Fiorillo and the MOAS boat Phoenix permitted the rescue of the majority of the migrants who had fallen into the water," the Italian coast guard said in a statement Wednesday evening.

Earlier in the day, the coast guard said some 200 of 500 migrants aboard had fallen into the sea, either because a big wave hit the vessel or many migrants suddenly shifted to one side.

The capsizing incident was one of several rescue operations coordinated by the Italian coast guard. In all, some 1,800 migrants were rescued Wednesday from unseaworthy dinghies or wooden fishing boats. A commercial tugboat and three cargo ships in the vicinity were pressed into service to save lives, along with vessels from the Italian navy, a European patrol force and non-profit vessels, the coast guard said.