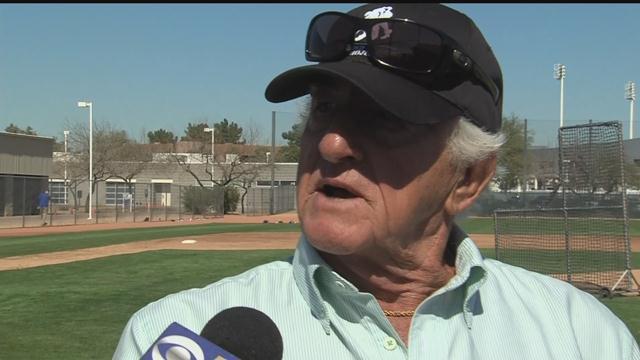 The first full squad workout of spring training usually brings out all of the dignitaries.

Owner Mark Attanasio spoke to the team and then to the media this afternoon.

And then Attanasio stood next to Bob Uecker as we caught both on camera, and the truth is, no matter who you are, when you're in the presence of Mister Baseball, he's the speaker and you are the audience.

We were treated to this today:

CBS 58: “When you got the start of a baseball season. And you've got Mr. baseball, Bob euchre, and you got the Brewers owner, Mark Attanasio, I think I'm the third wheel. Why don't you guys just take it?”

Bob Uecker: “You're definitely the third wheel. If there were two of us, you would be the second wheel. And if it was you, it would be a flat tire. That's about it. All winter and I got permission from the boss, I did slow pitch softball announcing out here for the senior citizens home. They don't use a ball. They just write on the paper what they think they would've done, they handed to me and I broadcasted. Nobody gets hurt and the fans clap and cheer. Had a nice talk over there. Mark, Craig, and the coaching staff, let me talk a little to the team. And we told him please don't follow anything that Bob does. Don't do what he did. If I do work with them, I show them the wrong things. Don't do this. Got me where I am today, broadcasting.”