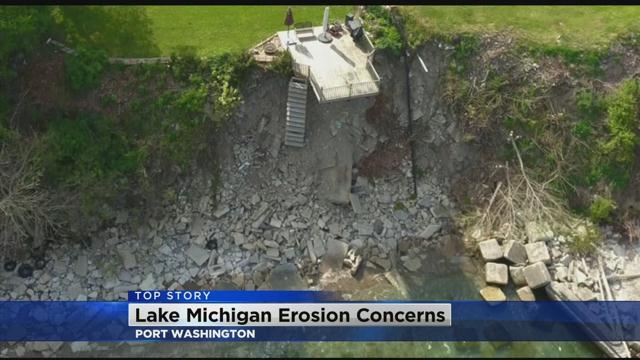 New evidence is turning up that this could impact lakefront properties up and down the Lake Michigan shoreline.

An expert said Port Washington may be the next town to deal with lake front problems.

And Port Washington's mayor said he is working to figure out how to handle it.

A coastline expert from University of Wisconsin, Gene Clark, said the erosion happening in Mount Pleasant is probably just the start of what we're going to see in the area.

Clark said a record rise in Lake Michigan water levels is part of the reason this is happening and says the Port Washington and Sheboygan areas also have water washing away part of the bluffs.

In the last month, debris slid off a bluff in Port Washington two times.

It blocked an access path to a public beach.

Port Washington's Mayor Tom Mlada said right now the city is working to come up with a plan.

"Obviously it's a concern collectively of ours whether right now you have a home on that bluff. You're going to be potentially building a home or whether you're a member of the public who really utilizes the lakefront resources,” Mlada said.

Both Mlada and Clark said there is no simple answer to stop bluff erosion.