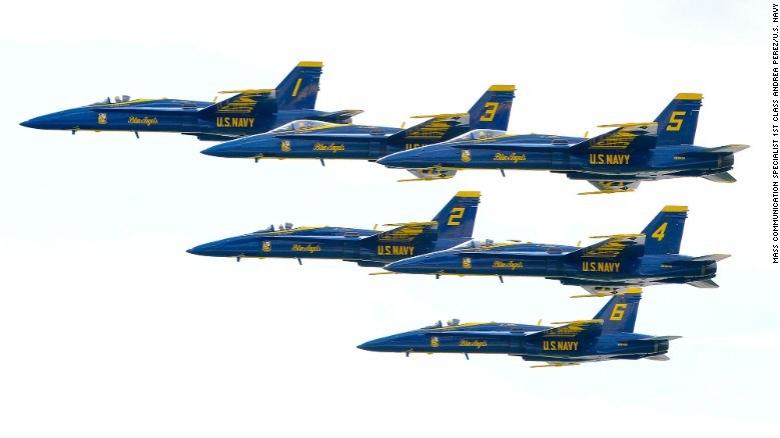 (CNN)The crash of a Blue Angels flight while it was preparing for an air show in Tennessee in June was a result of pilot error, a Navy report says.

Marine Capt. Jeff Kuss was killed in the crash June 2 in Smyrna, Tennessee, after he could not complete a maneuver in his F/A-18 jet, according to the report.
It said Kuss, flying Blue Angel Number 6, was going too fast and was not high enough when he tried what is called a "Split S" maneuver.
"He transitioned from the high performance climb to the Split S too low and too fast, and by not deselecting his afterburners during the maneuver, he continued to accelerate," the Navy report said.
"The net effect of these deviations was that the aircraft was simply too low and too fast to avoid impacting the ground."
The report said Kuss did not take any actions that could have possibly prevented the crash. He then tried to eject from the aircraft too late, it added.
"Although Capt Kuss was a highly trained and respected naval aviator, his deviations from standard operating procedures in executing the Split S maneuver resulted in a fatal loss of situational awareness," said the report dated August 25 and obtained by CNN on Thursday.
The Split S maneuver will not be performed in Blue Angels shows until at least next year, the report said.
Kuss, a native of Durango, Colorado, joined the Blue Angels in September 2014 and had accumulated more than 1,400 flight hours and 175 landings on aircraft carriers, according to the Blue Angels website. He was in his first year on Blue Angels squads flying at air shows and other public performances when the crash occurred.
After the crash, Blue Angels flight leader and commanding officer, Cmdr. Ryan Bernacchi, called Kuss "truly one of the absolute finest Americans this country can produce."
"We lost an aviator that believed so deeply in the Blue Angels' mission of inspiring others and representing the Navy and Marine Corps, our citizens and our great country," Bernacchi said.
The Blue Angels stopped performances for a month after the crash, canceling three weekends of shows. The group returned to the air in Traverse City, Michigan, in early July.
Share this article: