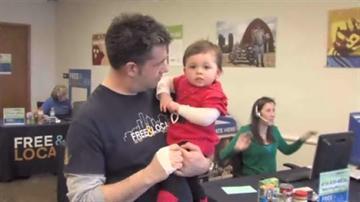 MILWAUKEE-The tradition known as Match Day once again showed how generous the greater Milwaukee can be when answering the call for help.

Individual charities raised money from early in the morning Thursday to midnight Friday.

Anything they raise will be proportionately matched by the Greater Milwaukee Foundation.

CBS 58 was a proud partner with Hunger Task Force broadcasting all day long and also on its sister stations including WMLW and Telemundo Wisconsin.

One of the most heartwarming stories came when a local six year old donated all of her allowance, $10, to the make sure other children don't go hungry.

There were spectacular moments when Portia Young of Sargento Cheese showed up with a check for $61,000, part of the touchdowns for charities program with the Packers.

And then there was the story Scott Marshall of Hunger Task Force who last year had to leave early because his wife was in labor. 1 year old Ellie was at the phone bank today with her dad and the other volunteers.

\"Knowing there are people out here that have little Ellies of their own that have to worry about if infant formula's available or baby food as we move into solids, it really makes that impact.\"

The Greater Milwaukee Foundation is a family of nearly 1,200 individual charitable funds, each created by donors to serve the charitable causes of their choice.

Grants from these funds serve people throughout Milwaukee, Waukesha, Ozaukee and Washington counties and beyond.

Started in 1915, the Foundation is one of the oldest and largest community foundations in the world.