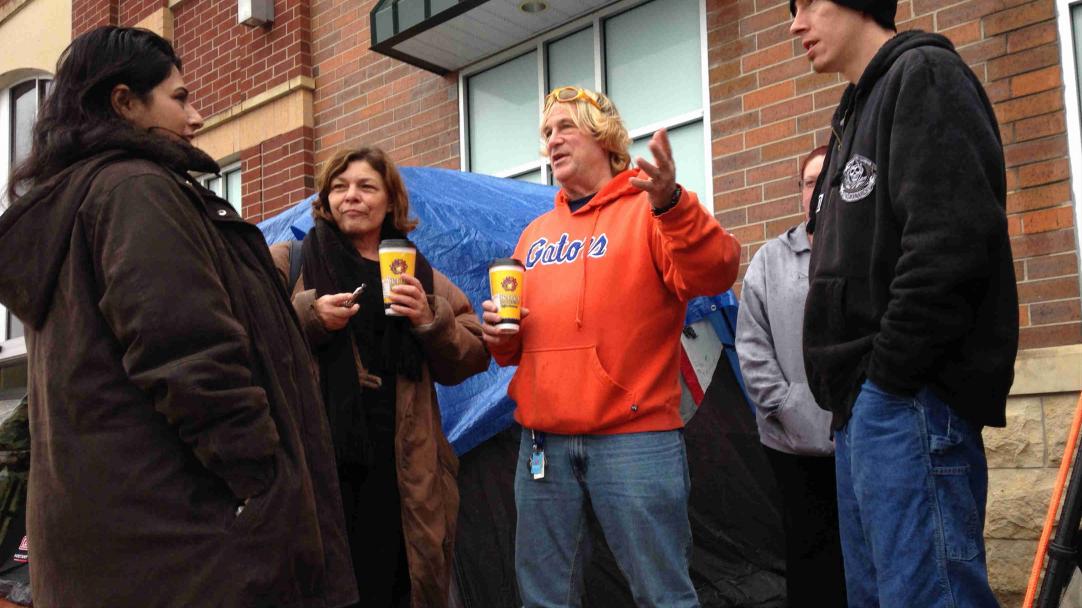 After four years of facing whatever weather Wisconsin cares to throw their way, Michael Franke and his band of Best Buy Black Friday campers came back for more.  The group claimed their spots in line outside the Delafield store last Thursday.

\"My kids still think I'm nuts, but my wife is like, 'We save so much money',\" Franke said Sunday afternoon.

Franke didn't know anyone in his group when he started waiting in line in 2010. Now every year they reunite, this time adding an eight-person tent turned into a living room complete with heat, food and satellite TV.

\"Well, they obviously enjoy it,\" passerby Carrie Ziebell said. \"People enjoy camping, so yeah, I think they're probably having a great time. But do they have jobs?\"

\"You've got guys sitting in a tree stand trying to shoot deer,\" Franke responded.  \"We're sitting in tents, watching TV, trying to get a good deal.\"

Finding those deals is the spirit Best Buy employee Arthur Jones loves to see. Jones says his Wauwatosa store enjoys getting Black Friday campers because it means people are excited about their products.

\"We've done a couple dry runthroughs of the store and how everything is going to be worked out,\" Jones said.  \"Our main goal this year is safety.\"

Best Buy will only allow a few dozen people in at a time when the doors first open Thanksgiving night.  It means working a shift that will force Arthur to leave his family dinner early.

\"I'm happy that I'm with my other family, my Best Buy family, hanging out, cracking jokes as we get people in and out of the lines,\" Jones said with a smile.

Lines that will include second families of their own.

\"I mean, it's just kind of fun,\" Franke said before heading back into his tent-living room.  \"We've really gotten to be really close.\"