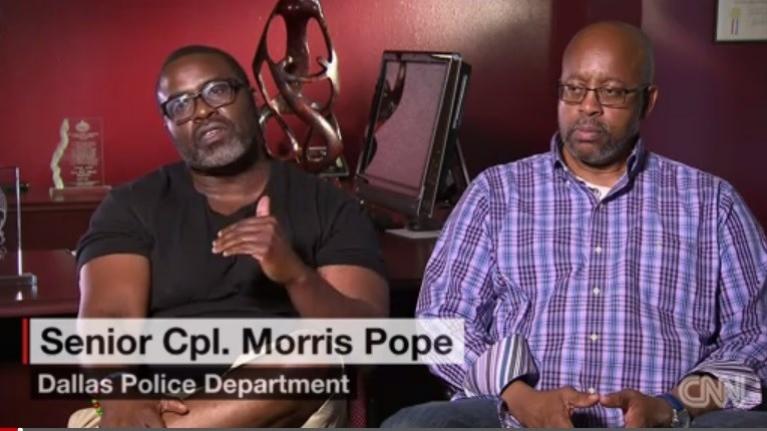 (CNN) Even before five fellow Dallas officers were shot and killed last week, Morris Pope was already in sorrow.

Like much of the country, the senior corporal had seen the police shooting deaths of black men in Falcon Heights, Minnesota, and Baton Rouge, Louisiana, on video.

"It hurt me when I saw what happened in Minnesota. I told my wife, I can't do this job anymore. I was that hurt about what I've seen," Pope said.

The shootings by and against police caused double despair for the 12% of local police officers across the United States who identify as black and wear blue uniforms. Now, in the aftermath of a tragic first week of July, CNN asked several of them to reflect on what it's like to be part of two communities in pain.

"When you're a black officer, you have a very unique perspective," Pope said.

Many officers were hesitant to open up about the recent tragedies for fear of losing their jobs or jeopardizing their safety. But Pope and others argued it's more important now than ever to encourage dialogue.

"I hope people look at the Dallas shooting and realize that, wow, we have a problem," said Anwar Sanders, 27, a black police officer in New Mexico. "And we have to think long term to fix that problem, or history will keep repeating itself."

Indeed, issues around race, gun violence and policing in the United States are not new.

The Rev. Martin Luther King Jr. mentioned police brutality in his "I Have a Dream" speech. Later, the videotaped police beating of taxi driver Rodney King in Los Angeles in 1991 led to riots. More recent videos showed the police killings of Walter Scott in North Charleston, South Carolina; Tamir Rice in Cleveland;Eric Garner in New York; and then last week Alton Sterling in Louisiana and Philando Castile in Minnesota.

"It's the same thing that's happening over and over again, and it's just different names, different places and different people," said Reginald Cotton, 33, a black Illinois police detective.

After watching videos of the violence last week, Cotton's first thought was, "There's so much anger out there."

"We need to eat at the same table and break bread and talk and get things out," said Cotton, who's also the founder of the Charity Contributors of Chicago, which raises money for nonprofit groups to help minority communities. "We have to educate our officers on how to develop trust within the community and how to become a part of the community."

Black officers in Dallas also said the relationship between minority communities and police departments is struggling.

"Unless we get to have a serious dialogue and be honest about a relationship that sometimes doesn't even exist at all, we will always be at this point where everyone loses," said Pope, an officer of 29 years who serves as parliamentarian of the Black Police Association of Greater Dallas.

Sanders, the police officer in New Mexico, said if white officers policing a black community don't make an effort to engage and nurture that relationship, they might make judgments based on fear, misunderstanding and stereotypes.

For example, if an officer views residents of a mostly black community as more violent or dangerous, then that officer might be more inclined to use force when interacting with them, leading to headline-making shootings.

"Some people don't even know they think that way," Sanders said.

"I see it all the time," he added. "I was at the gym and a white woman saw me walk in. She got off her machine and moved her bag so that it was away from me. ... She didn't realize I'm a cop. She just saw me as a threat."

In an emotional video posted live to Facebook, Ohio police Officer Nakia Jones said officers who experience such fear should quit. The video has garnered more than 7.5 million views.

"If you're afraid to go talk to an African-American female or male or a Mexican male or female because they're not white like you, take the uniform off," Jones, an officer of 20 years, says in the video. "You have no business being a police officer."

The true meaning of blue

Building a relationship with the community is what being a police officer is about, Cotton said.

When he first became a police officer, Cotton said he thought the job was all about catching the typical "bad guys," maybe drug dealers or car thieves. Over time, he realized the most important aspect of the job is being part of the community.

"I remember getting a random call about a woman who couldn't light her pilot light. I was 24 at the time," Cotton said.

"I walked into the home, and it was this 80-year-old lady who said that she didn't have any family members in the area and if she bent down to light the pilot light, she might not get back up," he said. "That really struck a chord in my heart, and I thought, wow, this is what it's about. For a year straight, I asked her, 'Are you alright? Everything OK?' "

But police see the negatives in a community, too. "I just saw two dead babies in a triple homicide last week," he said. "These things change people."

Still, if more officers focus on the positives, it might strengthen ties between people and police, Cotton said.

"I wanted to make a difference. ... I am my brothers' and my sisters' keeper. That's why I'm going to keep this uniform on."

Similarly, Sanders values his ties to the community he polices. As he spoke to CNN on the phone, a young man approached the officer and said, "My brother wants to be a cop. ... What should he do?"

Meanwhile, Cotton plans to organize a panel discussion for his community about the recent shootings and protests. He wants to include police officers, city officials and residents.

"It's about keeping the conversation open," he said, "and actually talking with each other and not to each other."

Thomas Glover, a Dallas police lieutenant and president of the Black Police Association of Greater Dallas, said dialogue needs to be followed by action.

"In order to make progress, we have to put some concrete things in place," said Glover, who has served 35 years with the department. He called for federal laws that would make police misconduct illegal.

"A lot of people say we already have those, but we don't see a lot of people prosecuted under them," Glover said. "We ought to have some type of permanent outside review for police officers and police action set up all across this country. ... But No. 1, we ought to have a dialogue."