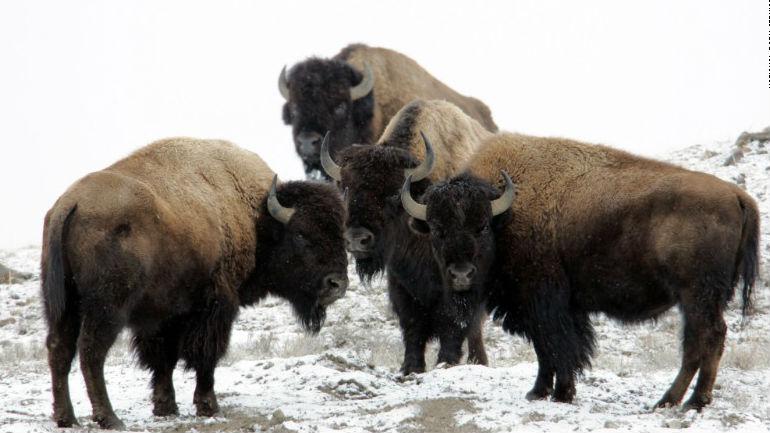 Bison attacked two more visitors at Yellowstone National Park over the past week, for a total of four attacks in the park so far this season.

A 68-year-old Georgia woman remained hospitalized Thursday after encountering a bison while hiking Wednesday on Storm Point Trail, according to the National Park Service.

As she passed the bison, it charged and gored her. A witness reported the attack to a nearby ranger leading a hike, who called for help. Due to the serious nature of the woman's injuries, she was taken by helicopter ambulance to a hospital outside the park. Her condition was unknown Thursday.

The other incident happened on June 23, when a 19-year-old Georgia woman and three friends who work at nearby Canyon Village were walking to their car after a late-night swim at the Firehole River. They saw a bison lying about 10 feet away, and one friend turned and ran. But the animal charged the teen and \"tossed her in the air,\" the park service said.

After the teen went to bed, she awoke a short time later feeling ill and called for medical help. She took an ambulance to a hospital outside the park and \"was released with minor injuries later that day,\" the park service said.

Four incidents in less than two months is a lot more than usual, Yellowstone spokeswoman Amy Bartlett said. \"We usually have one to two incidents per year,\" she said.

Almost 5,000 bison live in Yellowstone, located mostly in Wyoming and the only place in the United States where the animals have lived continuously since prehistoric times.

With July 4 approaching, the nation's national parks are entering their busiest season, and park officials are urging tourists to take extra care around wild animals.

Yellowstone's regulations require visitors to stay at least 25 yards away from all large animalsand 100 yards away from bears and wolves. \"Bison can sprint three times faster than humans can run and are unpredictable and dangerous,\" park officials warn.

Some tourists may provoke animals by getting too close to them. The consequences of treating wild animals like they're domesticated or in a zoo can be deadly, officials say.

On June 2, a 62-year-old Australian man visiting Yellowstone was seriously injured after getting too close to a bison near Old Faithful Lodge.

The man was reportedly within 5 feet of the bison while taking pictures when the animal charged him and tossed him into the air several times, according to park reports. The man was taken to a hospital for further medical treatment.

On May 15, a 16-year-old Taiwanese girl was gored by a bison while posing for a photo near Old Faithful, Yellowstone's famous geyser. She had been hiking near the bison, which was grazing next to a trail.

The girl suffered serious but not life-threatening injuries from the attack, the park service said.