Bill would give undocumented immigrants a shot at a driver's license 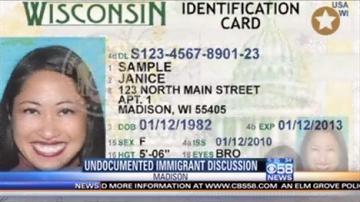 JoCasta Zamarippa will introduce her bill that would give undocumented immigrants the opportunity to get a driver's license.   They'd have to pass a driver's test like anyone else. She says the push is all about public safety.  Since people will likely get behind the wheel --give them a chance to pass a driver's test.  Then they could get car insurance too.

Zamarippa represents a big immigrant population in the Milwaukee area.  She got support from Republican Representative Garey Bies on this bill.  Bies worked in law enforcement in Door County for 30 years.

The pair will be joined by community leaders and others who support the bill at a press conference Wednesday.

It's not clear what kind of support the bill will have in the legislature.  But it's likely to spark debate about immigration.