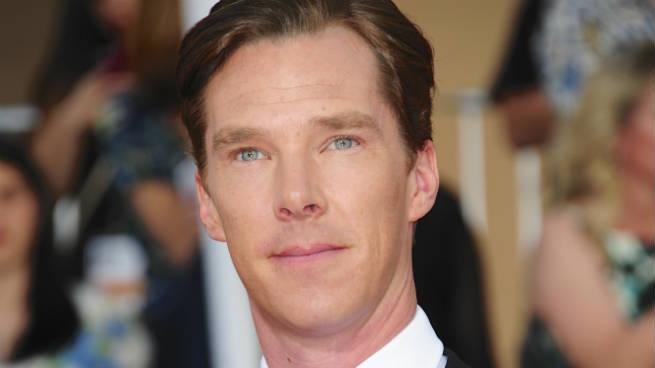 (CNN) -- Oscar-nominated star Benedict Cumberbatch has apologized for referring to black actors as \"colored\" on a U.S. talk show.

The \"12 Years a Slave\" actor said he was an \"idiot\" and \"devastated\" at his choice of words during an interview with PBS' Tavis Smiley about the lack of diversity in the British film industry.

Cumberbatch, 38, told Smiley: \"I think as far as colored actors go, it gets really difficult in the UK, and I think a lot of my friends have had more opportunities here [in the U.S.] than in the UK, and that's something that needs to change.\"

His comments were criticized by some observers on Twitter as being insensitive and out of touch. One user called Sonya Thomas asked: \"Benedict Cumberbatch used the term 'coloured' to describe black actors. What year are we in?\"

But Smiley, who is black, defended the \"Sherlock\" star on Monday, tweeting: \"Those who saw Benedict Cumberbatch on @PBS, know he feels persons of color are underrepresented in #Hollywood.\"

The actor, who appeared on Smiley's show to discuss his Oscar-nominated role in \"The Imitation Game,\" praised the efforts of Lenny Henry, a black British actor and comedian who has launched a campaign to ensure more ethnic minorities are employed in the UK media.

\"Something's gone wrong -- we're not being representative enough in our culture of different races, and that really does need to step up a pace,\" Cumberbatch said. \"It's clear when you see certain migratory patterns that there are more opportunities here than there are in the UK.\"

Cumberbatch issued the following statement to People magazine on Monday: \"I'm devastated to have caused offense by using this outmoded terminology. I offer my sincere apologies. I make no excuse for my being an idiot and know the damage is done.\"

\"I can only hope this incident will highlight the need for correct usage of terminology that is accurate and inoffensive. The most shaming aspect of this for me is that I was talking about racial inequality in the performing arts in the U.K. and the need for rapid improvements in our industry when I used the term.\"

\"I feel the complete fool I am and while I am sorry to have offended people and to learn from my mistakes in such a public manner please be assured I have. I apologize again to anyone who I offended for this thoughtless use of inappropriate language about an issue which affects friends of mine and which I care about deeply.\"

Anti-racism campaigners in the UK lamented Cumberbatch's use of the word as \"outdated\" but praised the actor for highlighting \"a very important issue within the entertainment industry and within society.\"

\"The lack of representation of people from black and ethnic minority backgrounds within certain industries in the UK is an issue which needs addressing, and we are pleased that Benedict has spoken out in support of more appropriate representation and of the views of actors and campaigners like Lenny Henry,\" a spokesperson from Show Racism the Red Card told CNN.

\"In doing so, he has also inadvertently highlighted the issue of appropriate terminology and the evolution of language. Show Racism the Red Card feel that the term 'coloured' is now outdated and has the potential to cause offence due to the connotations associated with the term and its historical usage.\"

\"Appropriate terminology differs from country to country; for example, we know that in some countries the term 'coloured' is still widely used, and that in the US the term 'people of colour' is quite common.\"