Behind the Badge: Wives of Officers Ask Community to Support Police 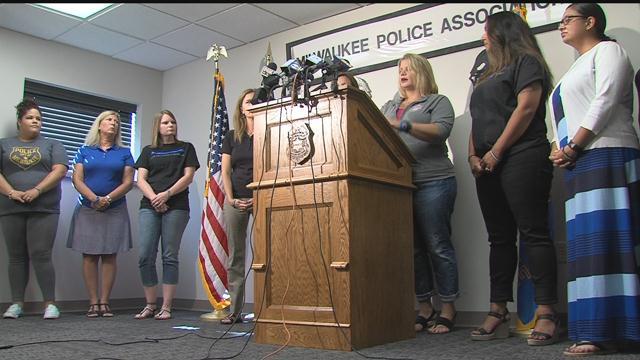 CBS 58—The wives and significant others of several Milwaukee police officers called on the community to support law enforcement, in the wake of several shootings.

The women are part of the organization Shielded Hearts, a group for wives and significant others of police officers. Some of the women at the press conference, held at the Milwaukee Police Association office, know all too well the pain of having a loved one shot in the line of duty.

A nightmare became reality for Tina Colon and her kids in April 11, 2009.

Her husband, Milwaukee police officer Vidal Colon was shot multiple times responding to a call. He survived,  but what happened took a toll on the entire family.

“It has been an extremely long healing process,” Colon said.” The ones that really seem to be effected the most, have been our children.”

Colon joined other spouses of law enforcement Tuesday, to ask the community to show support for police, following a string of attacks against officers across the county.

“They are human,” Colon said. “And they have families and loved ones and people who are counting on them coming home at the end of their shift.”

The women say when their officers leave for work, they try not to think about the worst case, but still the hugs are little longer and a little tighter.

“We no longer say goodbye to our spouses when they leave for work,” said Teresa Robinson, who’s husband is an officer. “We say see ya later. Love ya.”

It might be a thank you or even just a smile, but the families say the smallest gestures towards police will make a difference.

“Anything positive towards our law enforcement is helpful,” Colon said. “I do think positivity does spread.”