Behind The Badge: The Wisconsin State Fair Park Police Department 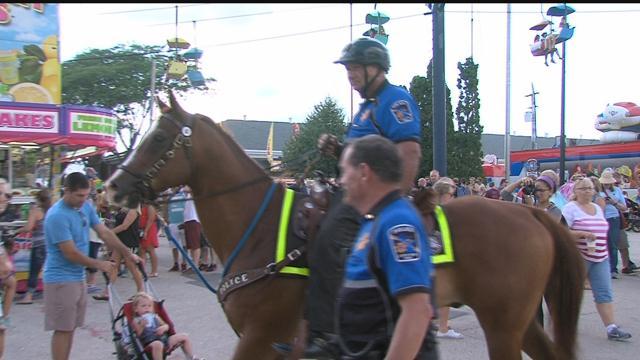 An estimated one-million people will attend the Wisconsin State Fair this year. The fair is a tradition for the people who go, but it's also a tradition for law enforcement that keeps the fair safe and some of the members have a lot of experience.

"I joined the State Fair Park Mounted Unit in 1975, and have ridden ever since, so it's been 43 fairs," said Lieutenant Greg Friberg.

Most of Friberg's time in law enforcement was spent patrolling state fair park while working for the New Berlin police department. But, he would do it on his own time.

"I took a vacation from New Berlin to come here, and a cut in pay, but it's something I wanted to do and I like to do and I've never regretted it," he said.

Friberg retired from New Berlin more than ten years ago, but this keeps him in touch with what he loves.

"It's just the most fantastic 11 days out of the year. You meet hundreds and hundreds and thousands of people," Friberg added.

There are close to 100 sworn officers on the State Fair Park police force, right up the ranks to the chief.

Mixed in are public safety officers who make up the driving force behind your safety at the fair each year.

"And we want our police department to reach out and be good community partners with the general public that comes here," Balash said.

The police force works for the various other events that happen at State Fair Park, and it's a job that Lieutenant Friberg just can't get away from.

"This is the second year I decided to leave," Friberg said. "But this one it's final. They gave me a plaque, so now i have to go."