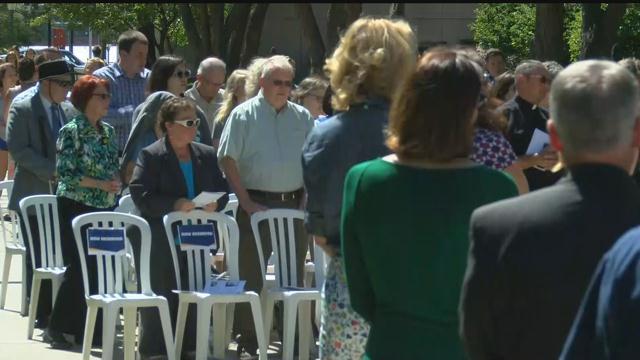 This coming Sunday Mother Teresa will become Saint Teresa during a service in Rome outside of the Vatican.

In honor of her being canonized in the Catholic Church, Marquette University held a special mass on Wednesday visitors shared memories of Mother Teresa's visit to the school in 1981.

Staff said Mother Teresa spent just 22 hours in Milwaukee during that visit and in that time she received the Pere Marquette Discovery Award which is the university's highest honor.

A statue of Mother Teresa stands outside the Schroeder Complex at at the school now. It's where the tribute mass was held.

"My two major memories are how tiny she was walking into the huge auditorium. And then my second memory was how bold her truth was," Kathy Coffey-Guenther, associate vice president for mission and ministry at Marquette University, said.

10,000 people gathered at the then-named MECCA Arena to hear her speak, according to a press release.

Sal Sendik says his experience was both smaller and bigger.

"This is the photo of my wife at Marquette University. I brought here from Colombia Hospital here to be with Mother Teresa," Sendik said.

"She was diagnosed with breast cancer that went into her complete frame. And it was in her skeleton," Sendik said.

Doctors gave Rosemary - Sal's wife - three months to live. He called people he knew at Marquette University to see if a meeting would be possible.

Before he knew it, Mother Teresa would be in a room with him.

"She was probably about five foot tall. She had hands like a farmer. Her hands were bigger than my hands, you know? And she had a face with wrinkles that there wasn't any room left for more wrinkles. But she was beautiful," Sendik said.

"Well it's a sensation that I'll never have in my life again, I'm sure of that. This was just something that you never forget," Sendik said.

He says that moment has never left him. And now he's looking forward to seeing Mother Teresa canonized because he knows how much help - or faith - she inspired in his family.

"My wife was religious. There's no doubt about that. But this just brought everything to a peak. And it made her smile the rest of her life - the little bit that was left," Sendik said.