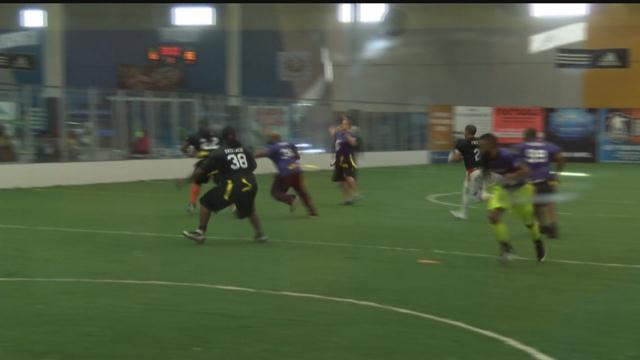 Saturday was as good a time as any to get back on an exercise  schedule after a few days of holiday overeating. It wasn’t a problems for dozens of former Milwaukee Public Schools football players who headed out to the annual Turkey Bowl Alumni Classic in Brookfield.

Most participants are about or approaching ten years since graduation. But when you watch them play out on the field most of them look like they still have the energy of their 17-year-old selves.

"My senior year, 2004, we lost conference due to the game we lost at [Milwaukee] tech so. They beat us 12-6 our homecoming game. Pretty much the winner won the conference that year," Chambers said.

"When I played...," Philip Cockroft, captain of the Milwaukee Tech team, said with a smile, "...we were the dominant team in the city. There was no rivalries because we destroyed everybody to be honest with you."

Cockroft helped coordinate this years event which took over the Midwest Orthopedic Sports Complex. Last year the tournament took in $4,000 through donations and sponsorships and the playoff continues to expand.

They've added another alumni team to the playoff every year since the turkey bowl started and word-of-mouth continues to spread through other semi-pro or flag football leagues, Cockroft said.

"Comradery. It's just a bunch of us former football players, alumni associations - we get together. It's bragging rights. That's all it really is," Cockroft said.

The participants also promoting what's called the MATC Promise which pay for up to four semesters of college education at MATC if a high school student fulfills certain requirements.

This year the Alumni team from Bay View won the tournament in overtime against the runner-up team from Rufus King International.