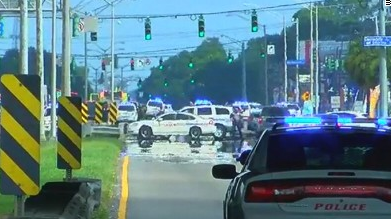 (CBSNews) BATON ROUGE, La. -- A deadly shooting of Baton Rouge police officers roiled the Louisiana capital on Sunday, and the city as well as the nation was already in turmoil as tensions over race and policing reach a head coast-to-coast.

Three Baton Rouge law enforcement officers were killed and three others wounded Sunday, less than two weeks after a black man was shot and killed by police here in a confrontation that sparked nightly protests across the city that reverberated nationwide.

A suspect described by police as a black male has been killed, according to officials. Police involved in the shooting included officers with the Baton Rouge Police Department and deputies from the East Baton Rouge Sheriffs Office.

The deceased suspect in the deadly shooting of Baton Rouge law enforcement officers appeared to have attacked police on his 29th birthday, CBS News has learned.

The suspect has been identified as a black male named Gavin Eugene Long of Kansas City, Missouri, sources confirm to CBS News. He was born on July 17, 1987.

One suspect was killed and two others might still be at large, Casey Rayborn Hicks, a spokeswoman for the East Baton Rouge Sheriff's Office, previously said. However, Louisiana state police said Sunday afternoon there is "no active shooter" in Baton Rouge.

The Baton Rouge Advocate reported that two other men were picked up across the Mississippi River in Addis and were being questioned by police as "persons of interest."

How the events unfolded

Police responded to a report of officers shot at a location on Airline Highway near Old Hammond Highway around 9 a.m., CBS affiliate WAFB reported.

A law enforcement source told CBS News senior investigative producer Pat Milton that police were called to the location on Airline Highway, less than a mile from the Baton Rouge Police Department headquarters, after someone reported a suspicious man with a weapon.

A witness tells CBS affiliate WAFB that he saw a masked man in black shorts and shirt running from the scene where three Baton Rouge law enforcement officers were shot and killed.

Brady Vancel said the man looked like a pedestrian running with a rifle in his hand, rather than someone trained to move with a rifle.

Vancel said he'd gone to work on a flooring job on a street behind the gas station where authorities say the shooting occurred. He said he heard semi-automatic fire and perhaps a handgun.

He saw a man in a red shirt lying in an empty parking lot and "another gunman running away as more shots were being fired back and forth from several guns."

He said the suspect's body was found next door, outside of a fitness center.

Political response to the shooting

The governor of Louisiana said the attack on law enforcement in Baton Rouge was unjustified.

Republican Donald Trump is blaming a "lack of leadership" for Sunday's shooting in Baton Rouge.

Trump said in a statement posted on his Twitter and Facebook pages that "We grieve for the officers killed in Baton Rouge today."

Trump is placing the blame on a lack of leadership and is demanding "law and order."

He asked, "How many law enforcement and people have to die because of a lack of leadership in our country? We demand law and order."

Hillary Clinton released a statement on Twitter in regards to the shooting.

"Today's devastating assault on police officers in Baton Rouge is an assault on all of us," she said.

Attorney General Loretta Lynch, responding to the police shootings Sunday in Baton Rouge, Louisiana, said there is no place in the United States for such appalling violence.

In a statement issued Sunday, Lynch said she condemns the shooting deaths of three officers and the wounding of several others "in the strongest possible terms."

She also is pledging the full support of the Justice Department as the investigation unfolds.

The attorney general said Agents from the FBI and Alcohol, Tobacco and Firearms are on the scene, and Justice Department will make available victim services and federal funding support, and provide investigative assistance to the fullest extent possible.

Lynch said everyone's hearts and prayers are with the fallen and wounded officers, their families and the entire Baton Rouge community in "this extraordinarily difficult time."

It is the fourth high-profile deadly encounter in the United States involving police over the past two weeks. The violence has left 12 people dead, including eight police officers, and sparked a national conversation over race and policing.

Baton Rouge has been tense since the July 5 shooting of a black man pinned to the ground by white police officers.

At a three-hour service Friday, mourners paid their respects to 37-year-old Alton Sterling, whose shooting outside a convenience store began a tumultuous week in race relations in America.

Last week, police arrested and identified three young people who they say plotted to kill Baton Rouge cops using guns stolen from a pawn shop. Law enforcement said at a conference they believe it to be a substantial and credible threat on police officers in the Baton Rouge area.

On Friday, grieving residents of Baton Rouge honored an appeal at the funeral of Sterling to celebrate his life rather than demonstrate about his death.

"If you want to protest, please leave now," Gary Chambers, master of ceremonies for the funeral, said at the beginning that the event at Southern University.

A steady stream of mourners filed past Sterling's casket, which was adorned with music notes and a smiling photo of the man. Sterling was selling CDs outside the Triple S Food Mart store, as he had done for years, when he was killed by police responding to a call of a man threatening someone with a gun. Police have said they found a gun in Sterling's pocket.

Sterling's death was captured on cellphone video and circulated widely on the internet. His death, along with another fatal police shooting in Minnesota last week, sparked widespread protests. Then the fatal shooting of five police officers in Dallas by a black sniper heightened tensions even more.

Sterling's death heightened tensions in Baton Rouge, where about 200 protesters were arrested over the weekend. East Baton Rouge Parish District Attorney Hillar Moore said his office reviewed initial police reports on 185 arrests between July 8-11 and determined it will not prosecute roughly 100 of those cases.

Moore said they involve protesters who were arrested only on misdemeanor charges of obstruction of a roadway or public passage. DeRay Mckesson, a prominent Black Lives Matter activist, was among them. Moore said his office is reviewing the rest of the arrests, which include allegations such as resisting arrest, carrying guns or some "act of violence."