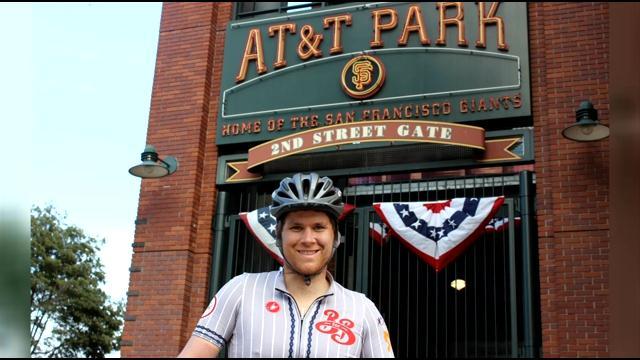 A baseball fan from Wisconsin is in the final innings of his marathon bicycle tour.

Matt Stoltz, a UW-Madison student has spent the summer riding his bicycle across the country, with the goal of visiting every major league baseball stadium in the country.  He started his tour in April and as of today, he has two ballparks left on his list.

According to his itinerary, Stoltz was scheduled to see a White Sox game in Chicago on Tuesday.  Then he rides through Wisconsin, headed for a Twins game at Target Field in Minneapolis on September 20.   Then his final stop is Miller Park and a Brewers game on Saturday, October 3.

In May, Stoltz told us, \"I'm anxiously awaiting that bratwurst\", at Miller Park.

And today, he tweeted out this message: \"Dontcha think the Brewers should do something really awesome for when I hit ballpark 30 on October 3rd?  Tweet at them to help us out!\"

Stoltz calls his adventure Biking For Baseball and as part of the tour, he's been raising money for Big Brothers & Big Sisters.