Barrett wants to be part of MPS superintendent search, outlines what's next for Milwaukee 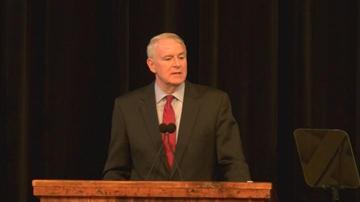 MILWAUKEE -- Milwaukee mayor Tom Barrett spoke at Journey House on the south side Monday morning - citing his commitment to neighborhoods. Whether that means fighting  foreclosures or crime.

The mayor acknowledged a big part of that commitment is public safety.  He says there were too many homicides last year - 106 to be exact.  He doesn't want to sugarcoat it - there's work to do.

He and police chief Ed Flynn will go to New Orleans tomorrow for a meeting about youth violence.  They'll meet with other mayors and police chiefs from across the country looking for common solutions.

The mayor also focused on education.  He recognized some MPS teachers and students who are doing great things.  But reiterated the need to do better in the classroom.  With current superintendent Greg Thornton on his way to Baltimore, Mayor Barrett said he'll be engaged in the selection process for a new MPS leader.

\"I'm planning on sitting down with the current superintendent and getting his sense on where we have to go.  But clearly the mayor and the superintendent have to be able to work closely together.\"

As part of the education focus - the mayor called for donations to his earn and learn summer jobs program. He wants to offer 3,000 jobs to teenagers this summer.