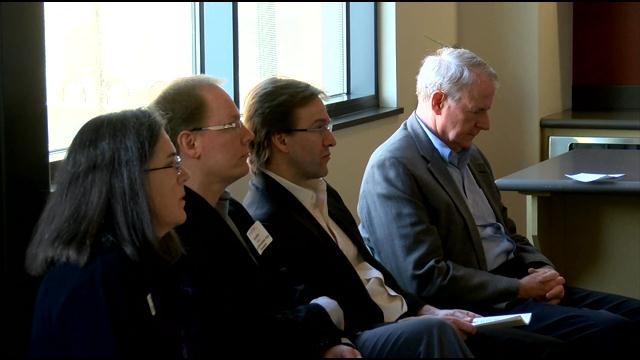 There's now an app available to help domestic violence victims in the Milwaukee area.  The new app was developed with help from students at UWM in partnership with Sojourner Family Peace Center. It's another tool in the so-called 'toolbox' for domestic violence victims. Sojourner Family Peace Center executive director Carmen Pitre says its another way for victims to get help.

Milwaukee Mayor Tom Barrett praised the app development as well, but he was quick to note that domestic violence victims are facing, in his opinion, an uphill battle with a bill in the state legislature.

The bill would eliminate the 48-hour waiting period for handgun purchases. Mayor Barrett says it makes no sense to eliminate it.  He accused Governor Walker of panning to the National Rifle Association by supporting the bill.  Pitre says lawmakers need to be careful when they talk about easing restrictions on gun purchases.

\"I don't think encouraging people in relationships to get guns to protect themselves against each other is a long term sustainable way to deal with this,\" Barrett said.

\"It scares me to think that we're rolling back protections,\" Pitre said. \"It's also unfortunate to have people say that the restraining order just a piece of paper. It's a piece of paper but it's an important piece of paper and the majority of abusers do pay attention.\"

A senate committee will meet at 1:30 Thursday about this bill in Madison.

The app is available to download on Google play and the Apple App Store.