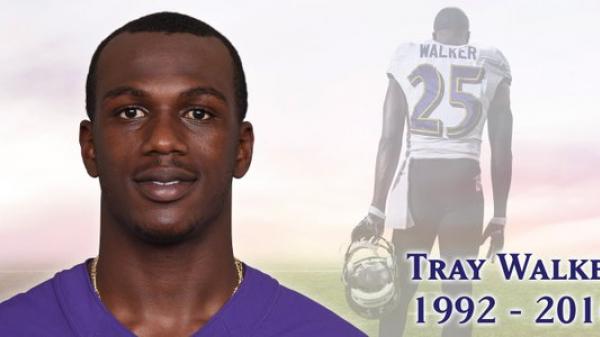 Just before 8 p.m. Thursday, the 23-year-old Walker collided with a Ford Escape in an intersection, CBS Miami reported.

"The dirt bike was traveling westbound on one of those dark streets, (Walker was) dressed in black with no lights could be a contributing factor," Miami-Dade Police Det. Dan Ferrin told the station. Additionally, Ferrin said Walker was not wearing a helmet.

The driver of the SUV remained on the scene and cooperated with police.

Walker was taken to Jackson Memorial Hospital where he died Friday afternoon. His family and friends gathered at the hospital after the crash, according to CBS Baltimore.

"He has his family, his friends -- we here to support and see what goes on with Tray," sister Shalonda Martin told CBS Baltimore. "We praying. We ask everyone else to pray and keep tray in the prayers."

Ravens head coach John Harbaugh wrote a heartfelt open letter to the team Friday, calling it "an incredibly difficult time for our Team and our Family."

"As I focused about Tray this morning, some thoughts came to mind that I wanted to share," Harbaugh wrote. "What would I say to my own son, if I had a son, in a situation like this? You guys are that important to me."

Harbaugh went on to detail things he wanted the players to keep in mind.

"I am asking you to consider what is at stake in your life. Consider what your thoughts, actions and choices mean to those around you. Live your life fully and with purpose. Have fun and share your happiness. Find Your Faith, and allow God to Grow Your Faith," he wrote.

Walker was selected in the fourth round of the 2015 NFL draft. He played in eight games last season, mostly on special teams. A native of Miami, Walker played in college at Texas Southern.