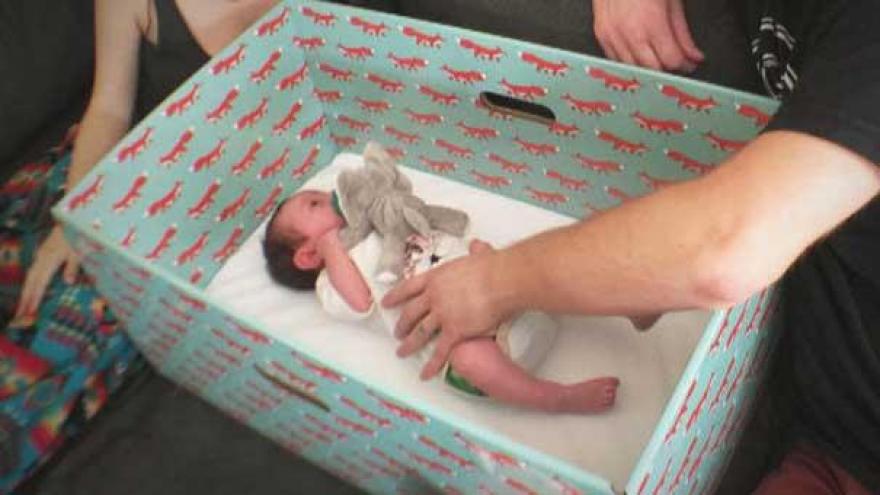 (CBS NEWS) Every year, about 3,500 babies in the U.S. die in sleep-related incidents, often involving blankets or toys blocking the flow of oxygen.

New Jersey is hoping to lower that number with help from a simple cardboard box that doubles as a crib.

In Camden, N.J., Dolores Petersen became one of the first people in the state to pick up a free box for her newborn.

“She was just chillin’ in there, looking everywhere,” Petersen told correspondent Tony Dokoupil. “I thought she’d scream, but she didn’t. She liked it.”

She admits that it felt a little strange putting five-week-old Arabella in a crib made of cardboard.

But inside is a firm mattress, a fitted sheet, and the kind of clean, uncluttered environment that doctors recommend for safe sleep.

“The box ain’t nothing special,” Petersen said, “but it’s somewhere for her to sleep where she won’t get SIDS or get hurt. Because you can have her in your bed and just roll over and that’s it.”

SIDS is Sudden Infant Death Syndrome, a major reason why the United States is way behind other countries when it comes to  infant mortality, ranking 26th in the most recent study.

At the top of that list is Finland, a country that’s been giving out baby boxes for nearly 80 years.

“I would love to take credit for coming up with the idea,” said Jennifer Clary, “but actually I read the same article that millions of people did around the world, called, ‘Why Finnish babies sleep in cardboard boxes’.”

Clary is co-founder of the Baby Box Company, launched in Los Angeles in 2013. She sells the basic box online for about $70.

“A box can be anything. The reason that ours are valuable is because not one parent receives one of my baby boxes without having received copious safe-sleep education.”

With money from the CDC and corporate donors, more than a million mothers nationwide will have access to a baby box this year, Clary says. That includes pilot programs in San Francisco and a hospital in New Hampshire.

But New Jersey’s effort is by far the most ambitious, providing every mother a box, plus supplies worth about $150.

Kathryn McCans, chair of the New Jersey Child Fatality and Near Fatality Review Board, which runs the program, said: “We have to change everyone’s behavior so that no child is left at risk. It’s really not about your socioeconomic status; it’s about what is the safest environment for your baby.”

Thanks to her baby box, Delores Peterson is already resting easier. ”I was like, what’s so great about this box? But when you stop and think about what it’s really good for, I wanted a box.”

To get a box, New Jersey parents have to watch a 10- to 15-minute series of videos on safe sleep habits and take an online quiz.

About 3,800 parents did so in the first day of the program.

The boxes are good until their babies are able to pull themselves up, at about six months old.