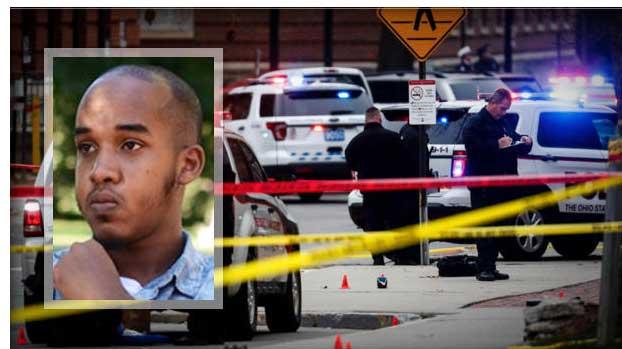 COLUMBUS, Ohio (CBS NEWS) - A young man deliberately rammed students with a car on the campus of Ohio State University and then jumped out to stab them on Monday morning, setting off a campus-wide lockdown and a mass active shooter alert, officials said. The man was quickly shot dead by a campus officer nearby.

Ohio officials said it appears this is possibly an act of terrorism, and the FBI and ATF have been sent in to help investigate.

A federal law enforcement official tells CBS News that the man shot and killed in the incident at Ohio State University has been identified as 18-year-old Abdul Ali Artan, a Somali refugee who was a legal permanent resident and student at the university. Officials have not said when or where he entered the United States.

At around 9:52 a.m., a male suspect drove his vehicle over the curb near the Watts building, which holds the chemical engineering department, officials said.

The fire department was already on the scene, responding to a report of a chemical leak which turned out to be a bad filter. The building had been evacuated. Students were returning to class when the incident occurred. Officials have said initial indications are that the fire alarm and timing of the attack were coincidental.

After ramming students returning to the building, the suspect got out of the vehicle and began stabbing people with what officials described as a butcher knife.

Ohio State University officials said Officer Alan Horujk was already on the scene, and he responded to the incident quickly, shooting the suspect dead before he could harm more people.

At least 10 people were wounded during the incident, with one person in critical condition. All of the injured appear to have either stabbing or blunt trauma wounds, said Andrew Thomas, the chief medical officer at Ohio State University Wexner Medical Center.

At least one witness to the scene told CBS Columbus affiliate WBNS-TV said a fire alarm was pulled inside the Watts Lab, and when people exited, a car was waiting for them and appeared to purposefully run them over.

Another student witness told CBS News she saw a grey car drive by the engineering building at a high speed, hit a cop, then proceed to hit other people.

The identities of the injured have not been released.

Artan, the deceased suspected shooter, appears to have given an interview with the school’s student newspaper, the Lantern, that ran in August of this year. In it he talked about why it was important for him to have a quiet place to go when he prays.

“This place is huge and I don’t even know where to play,” Artan said. “I wanted to pray in the open, but I was kind of scared with everything going on in the media. I’m a Muslim, it’s not what the media portrays me to be. If people look at me, a Muslim praying, I don’t know what they’re going to think, what’s going to happen.”

CBS News correspondent Jeff Pegues reports many of the signs from this incident point towards this being precisely the kind of terrorism federal law enforcement officials have been warning about for some time now.

Last week, a Brooklyn man was arrested for being an ISIS supporter, and was accused of plotting something similar to the attack in Nice, France for Times Square by seeking to drive a truck into a crowd.

Columbus, Ohio, itself has been on alert for localized terrorism for some time. Earlier this year a man with a machete randomly attacked diners in Nazareth Restaurant before being shot dead by police. Officials believe the incident was terrorism related.

With nearly 60,000 students at its main Columbus campus, Ohio State is the state’s largest employer and one of the nation’s largest universities.