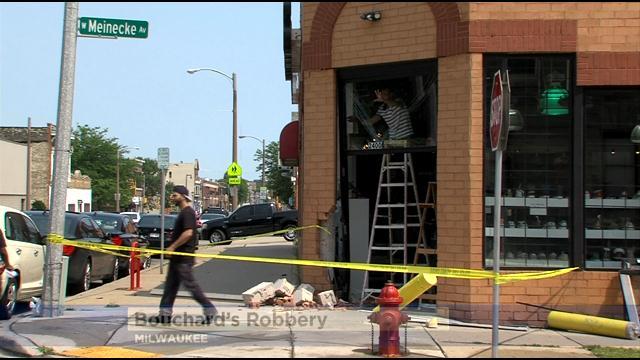 Shattered glass and busted brick from the wall is just some of the damage left behind from an early morning attempted burglary at Bouchards.

\"People are scared to even shop in this area due to the fact there's always something going on,\" said Eddie Parr, manager of the Cricket Wireless next door.

This time, authorities say three male suspects rammed a vehicle through the glass front doors to break in. The owner was inside and fired shots, seriously wounding a 20-year-old man.

\"I feel like people just need to get a job, get a grind, get something because you see what's happening, you gonna get killed,\" Parr said.

Just eight months ago, a store employee was shot during a robbery attempt.

Parr remembers that day. He says people want designer clothes and shoes so bad, they're breaking in his store to get inside Bouchards.

He said repairs have cost thousands. In fact, Parr just fixed and painted a wall inside his store after an incident nearly two months ago.

The City of Milwaukee sealed up the massive hole at Bouchards with boards. Late Friday evening, the store on N. Martin Luther King Jr. Drive had re-opened for business.

The three suspects, ages 20, 18 and 17, are in police custody as the investigation continues. It is unclear if the owner will face any charges.