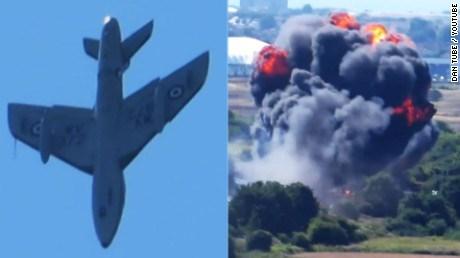 (CNN) -- At least seven people are dead after a vintage military aircraft crashed Saturday on a busy road in southeastern England, police said.

The Hawker Hunter jet was taking part in an air show at an airport near Shoreham in Sussex.

\"Emergency services have declared a major incident and a number of helicopters have been deployed to the scene to evacuate casualties to hospital,\" Sussex police said in a statement.

The plane crashed on what police described as \"a busy main road\" adjacent to the airport. All the deaths are all believed to have occurred on the road, with no reports of injuries to anyone at the airfield where the show was taking place, the statement said.