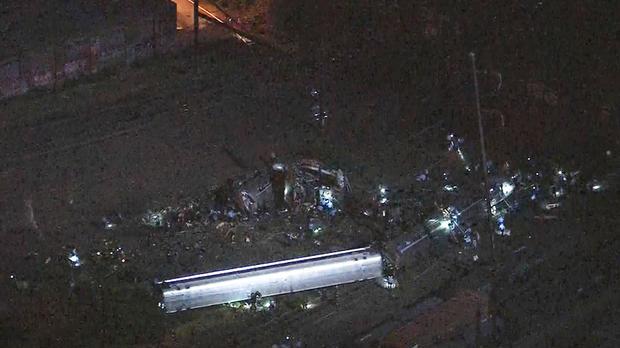 At least 5 people were killed Tuesday night when an Amtrak train headed to New York City crashed in Philadelphia. Another six people were hospitalized in critical condition, and there are dozens of other people with lesser injuries.

\"It's an absolute, disastrous mess,\" said Philadelphia Mayor Michael Nutter. \"I've never seen anything like this in my life.\"

Nutter said there were 243 people aboard the train, including 5 Amtrak employees. He said there were at least 7 cars in various states of disarray. Nutter stressed that investigators don't yet know what caused the accident.

All Amtrak service between New York and Philadelphia was canceled Tuesday night.

Train 188, a Northeast Regional, had left Washington, D.C., earlier Tuesday in route to New York. At about 9:30 ET the front of the train was going into a turn when it shook and skipped off the tracks. CBS Philadelphia reports the derailment occurred in Philadelphia's Port Richmond neighborhood.

Aria Health Hospital reported at least 15 passengers being treated for injuries, with more on the way.

Several injured people, including one man complaining of neck pain, were rolled away on stretchers. Others wobbled while walking away. An elderly woman was given oxygen.

An Associated Press manager who was on the Amtrak train that derailed in Philadelphia said he was watching Netflix when the train started to decelerate, like someone had slammed the brake. Paul Cheung said everything started to shake and people's stuff started flying everywhere. He said it all happened \"in a flash second.\"

Cheung said another passenger urged them to escape from the back of his car, which he did. He saw passengers trying to escape through the windows of cars tipped on their side. The front of the train was mangled. Cheung described it \"like a pile metal.\"

Police swarming around the crash site, in Port Richmond, a working-class area, told people to get back, away from the train. They pleaded with curious onlookers: \"Do NOT go to scene of derailment. Please allow 1st responders room to work.\"

Former Congressman Patrick Murphy was on the train and said he has been helping people. He tweeted photos of firefighters helping people in the wreckage.

\"Pray for those injured,\" he said in a tweet.

A passenger on the train, Beth Davidz was on the phone when her New York City-bound Amtrak train derailed in Philadelphia. She told CBSN's Anne-Marie Green that she felt the train go off the tracks and that it seemed to be \"sliding off.\"

\"It was a scary slow moment,\" said Davidz. She said she and other passengers had to climb out of the car in the dark.

The cause of the crash was unknown. Amtrak said it was aware of the derailment and would provide updates later. The National Transportation Safety Board said Tuesday night it was gathering information about the derailment.

Another Amtrak train crashed on Sunday. That train, bound for New Orleans, struck a flatbed truck at a railway crossing in Amite, killing the truck's driver and injuring two people on the train.

In March, at least 55 people were injured when an Amtrak train collided with a tractor-trailer that was stuck on the tracks in North Carolina. Port Richmond, the site of Tuesday's crash, is one of five neighborhoods in what's known as Philadelphia's River Wards, dense rowhouse neighborhoods located off the Delaware River.