At least 30 killed in shelling in Ukrainian city of Mariupol, officials say 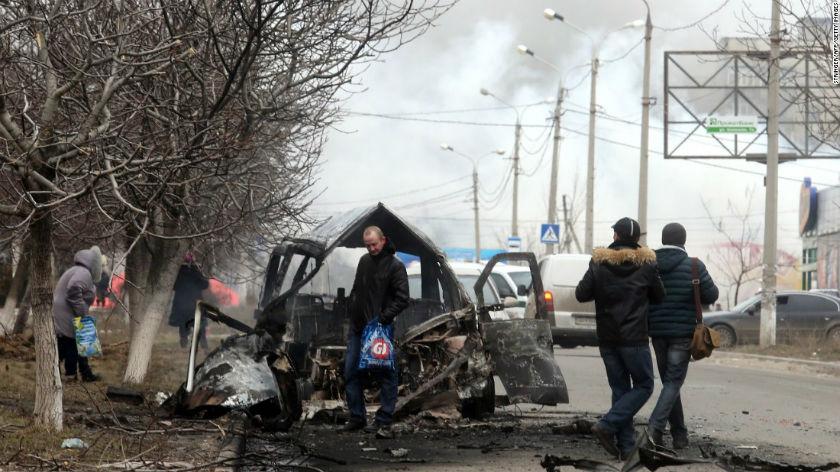 (CNN) -- At least 30 people, including two children, have been killed in shelling in the southeastern Ukrainian city of Mariupol, city officials said Saturday, in the latest violence to rock the disputed Donetsk region.

Another 93 people were injured, 75 of whom needed hospital treatment, Mariupol City Council said.

Pro-Russian separatists are blamed for the attack on residential areas in the port city, Donetsk regional police chief Vyacheslav Abroskin said on his Facebook page.

Based on preliminary assessments, the shells were fired from Grad rocket systems, a statement from Mariupol City Council said.

The statement also said the situation was under control, and urged residents not to panic but to rely on information from official sources only.

The reported incident comes amid a surge in fighting between government forces and pro-Russian rebels.

Thousands have been killed since the conflict broke out in the spring of last year and a ceasefire agreed to in September in Minsk, Belarus, crumbled long ago.

U.S. officials took to Twitter to condemn the latest violence.

The foreign ministers of Ukraine and Russia met this week in Berlin to discuss a way out of the violence. But despite the talks, violence in the breakaway Donetsk and Luhansk regions shows no sign of abating.

Thursday's shelling of a transit stop in Donetsk city -- an attack that Ukraine's Defense Ministry blamed on rebels -- killed eight civilians, according to state news reports. But Ukrainian troops have come under heavy fire as well.

The OSCE monitoring mission in Ukraine condemned continuing fighting in civilian areas in a statement Saturday and urged both sides to refrain from using force in such areas, including near Donetsk airport.

\"Using residential areas as firing positions attracts counter-firing to these areas, further endangering the lives of civilians,\" it said.

\"All parties need to take robust and immediate action in order to end the new escalation in fighting and its heavy toll on civilians.\"

Ukraine and the West accuse Russia of sending troops and equipment over the border. In a bid to put pressure on Moscow over Ukraine, the United States and European Union have imposed financial sanctions against Russian interests.

Russian President Vladimir Putin blamed the wave of recent casualties on those giving the order to fire in heavily populated areas, in remarks reported by the state-run Itar-Tass news agency Friday.

\"Those who give such criminal orders bear responsibility for this. People doing that should know that there is no other way of resolving such conflicts than peace negotiations and political measures,\" he said.

Putin also suggested Ukraine was not interested in finding a peaceful resolution to the crisis and said he hoped \"common sense\" would prevail.

The conflict in eastern Ukraine broke out after Russia annexed Ukraine's southeastern Crimea region, as pro-Russia separatists claimed control of the Luhansk and Donetsk regions.

\"We fear that the real figure may be considerably higher,\" the Office of the U.N. High Commissioner for Human Rights said about the death toll in a report released Friday.