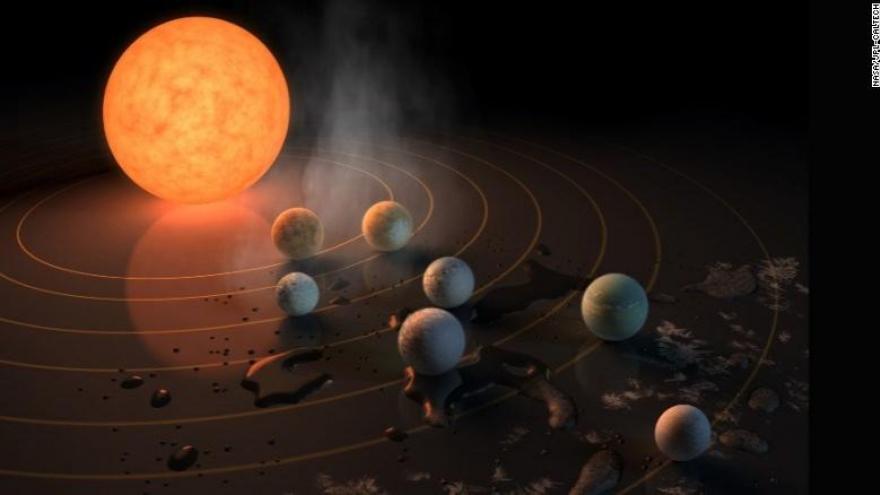 (CNN)Astronomers have found at least seven Earth-sized planets orbiting the same star 40 light-years away, according to a study published Wednesday in the journal Nature. The findings were also announced at a news conference at NASA Headquarters in Washington.

This discovery outside of our solar system is rare because the planets have the winning combination of being similar in size to Earth and being all temperate, meaning they could have water on their surfaces and potentially support life.

"This is the first time that so many planets of this kind are found around the same star," said Michaël Gillon, lead study author and astronomer at the University of Liège in Belgium.

The seven exoplanets were all found in tight formation around an ultracool dwarf star called TRAPPIST-1. Estimates of their mass also indicate that they are rocky planets, rather than being gaseous like Jupiter. Three planets are in the habitable zone of the star, known as TRAPPIST-1e, f and g, and may even have oceans on the surface.The researchers believe that TRAPPIST-1f in particular is the best candidate for supporting life. It's a bit cooler than Earth, but could be suitable with the right atmosphere and enough greenhouse gases.

If TRAPPIST-1 sounds familiar, that's because these researchers announced the discovery of three initial planets orbiting the same star in May. The new research increased that number to seven planets total."I think we've made a crucial step towards finding if there is life out there," said Amaury Triaud, one of the study authors and an astronomer at the University of Cambridge. "I don't think any time before we had the right planets to discover and find out if there was (life). Here, if life managed to thrive and releases gases similar to what we have on Earth, we will know."

Life may begin and evolve differently on other planets, so finding the gases that indicate life is key, the researchers added.

"This discovery could be a significant piece in the puzzle of finding habitable environments, places that are conducive to life," said Thomas Zurbuchen, associate administrator of NASA's Science Mission Directorate. "Answering the question 'are we alone?' is a top science priority, and finding so many planets like these for the first time in the habitable zone is a remarkable step forward toward that goal."

And as we've learned from studying and discovering exoplanets before, where there is one, there are more, said Sara Seager, professor of planetary science and physics at Massachusetts Institute of Technology. Seager and other researchers are encouraged by the discovery of this system because it improves our chances of finding another habitable planet, like Earth, in the future, by knowing where to look.The planets are so close to each other and the star that there are seven of them within a space five times smaller than the distance from Mercury to our sun. This proximity allows the researchers to study the planets in depth as well, gaining insight about planetary systems other than our own.Starting closest to the star and moving out, the planets have respective orbits from one and a half to nearly 13 Earth days. The orbit of the farthest planet is still unknown.

Standing on the surface of one of the planets, you would receive 200 times less light than you get from the sun, but you would still receive just as much energy to keep you warm since the star is so close. It would also afford some picturesque views, as the other planets would appear in the sky as big as the moon (or even twice as big).

On TRAPPIST-1f, the star would appear three times as big as the sun in our sky. And because of the red nature of the star, the light would be a salmon hue, the researchers speculate.

The researchers believe the planets formed together further from the star. Then, they moved into their current lineup. This is incredibly similar Jupiter and its Galilean moons.

Like the moon, the researchers believe the planets closest to the star are tidally locked. This means that the planets always face one way to the star. One side of the planet is perpetually night, while the other is always day.Based on preliminary climate modeling, the researchers believe that the three planets closest to the star may be too warm to support liquid water, while the outermost planet, TRAPPIST-1h, is probably too distant and cold to support water on the surface. But further observation is needed to know for sure.Over the next decade, the researchers want to define the atmosphere of each planet, as well as to determine whether they truly do have liquid water on the surface and search for signs of life.

Although 40 light-years away doesn't sound too far, it would take us millions of years to reach this star system. But from a research perspective, it's a close opportunity and the best target to search for life beyond our solar system."If we learn something now, it can determine if we looked in the right place," Gillon said.

In 2018, the James Webb Space Telescope will launch and be positioned 1 million miles from Earth with an unprecedented view of the universe. It can observe large exoplanets and detect starlight filtered through their atmosphere.

The researchers are also searching for similar star systems to conduct more atmospheric research. Four telescopes named SPECULOOS (Search for habitable Planets EClipsing ULtra-cOOl Stars) based in Chile will survey the southern sky for this purpose.

This star system will probably outlive us because this type of star evolves so slowly. When our sun dies, TRAPPIST-1 will still be a young star and will live for another trillion years, Gillon said. After we are gone, if there is another part of the universe for life to carry on, it may be in the TRAPPIST-1 system.

"This is the most exciting result I have seen in the 14 years of Spitzer operations," said Sean Carey, manager of NASA's Spitzer Science Center at Caltech/IPAC in Pasadena, California. "Spitzer will follow up in the fall to further refine our understanding of these planets so that the James Webb Space Telescope can follow up. More observations of the system are sure to reveal more secrets."