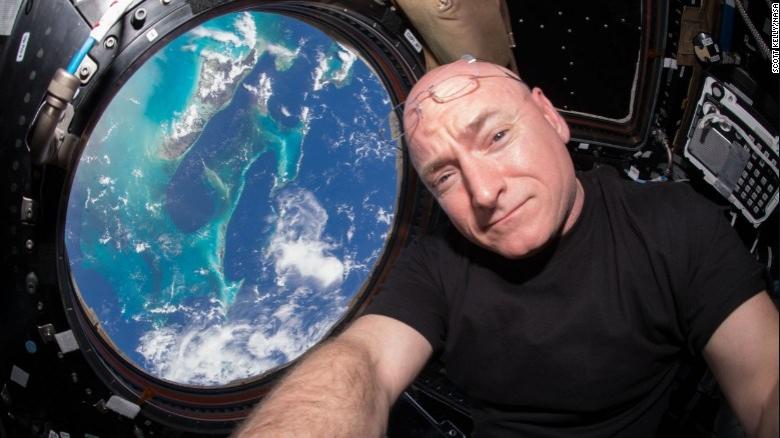 (CNN)NASA astronaut Scott Kelly is back on Earth.

Kelly could be seen pumping his fist and giving a thumbs up after being hoisted from the Russian Soyuz spacecraft that brought the trio back.

All three underwent field tests immediately after leaving the spacecraft.Kelly has completed a nearly yearlong mission on the International Space Station, the longest any U.S. astronaut has been in space.Spending 340 days in space could affect a person's vision and bones, but Kelly said last week that physically, he feels pretty good. "I could go for another 100 days or 100 years," the astronaut said during his last briefing with reporters from orbit.

But the long stay has also been lonely. "The hardest part is being isolated from people on the ground who are important to you," he said.The space veteran said he has witnessed some of the most amazing scenes of Earth during his mission, like spotting the northern lights, passing over the Bahamas and watching huge storms like Hurricane Patricia.He's also gained perspective on Earth's climate while he's been orbiting the planet. "I feel more like an environmentalist since I've been up here," he said. "There are parts of the Earth that are covered with pollution all the time. I saw weather that was unexpected. Storms bigger than we've seen in the past. This is a human effect. This is not a natural phenomenon."

In a previous interview with CNN, Kelly said Earth's atmosphere "looks very, very fragile" from the space station. But there are opportunities to solve the Earth's environmental problems, Kelly said Thursday. "If we can dream it, we can make it so," he said.

Once Kelly lands, he will be flown to Houston's Ellington Field and go through a battery of physical and scientific tests. Afterward, he's looking forward to jumping into his pool, he said.

Kelly isn't bringing back any souvenirs -- this is his fourth mission in space, after all -- but he's looking forward to returning some personal items when he lands.

One of his biggest hopes for the Year in Space mission's legacy is that it helps NASA on its quest to take astronauts farther away from Earth on longer space flights -- a necessity for traveling to Mars in the future. "The space station here is a magical place, and an incredible science facility. I hope more people have the opportunity to do this in the future," he said.A year ago, before he launched, Kelly, 51, joked that he would be taller than his twin brother, former astronaut Mark Kelly (the husband of former Rep. Gabrielle Giffords), when he returns, because you get a bit taller in space. At least briefly.

"You do grow when you're up there for a long time," Kelly said last year. "Unfortunately it doesn't last."

But did he really get taller than his brother? Though he's no longer an astronaut, Mark Kelly volunteered to take part in NASA's "Twins Study" with his brother. NASA wants to see how the identical twins measure up after a year in two very different environments -- Scott in space and Mark on Earth.Scott Kelly also said he would spend a lot of time talking to people on Earth, messaging on social media -- and he did. He shared many pictures on Twitter taken from his perch about 200 miles above Earth.Kelly also promised to keep a personal journal of his experience on the space station and said that he might share it with us.

"I plan to be completely honest about it," he said before launch, but -- "who knows, maybe there are some crazy thoughts I'll have at the end that I wouldn't want to share."

Kelly also did experiments. Lots and lots of experiments. He and his one-year crewmate, Russian cosmonaut Mikhail Kornienko, conducted studies to help NASA better understand what happens to the human body in space: The eyes, brain, bones, muscles -- they all change in a weightless environment.

NASA needs to know a lot more about these changes to the body before it can send people to Mars or on any other long spaceflights.Kelly began his mission to the space station on March 27, 2015, riding a Russian rocket that launched from the Baikonur Cosmodrome in Kazakhstan.

He is coming home much the same way. When his mission ends, Kelly will have spent 340 consecutive days on the space station and a total of 520 days in space counting his time from previous trips. Both are records for U.S. astronauts, but not for Russia. Between 1987 and 1995, four cosmonauts spent a year or more in space.

Kornienko also is coming back Tuesday and cosmonaut Sergey Volkov is on the flight too -- though he did not spend a year on the space station.

Kelly's mission won't end once he lands. NASA will spend years analyzing the tests he conducted on board.