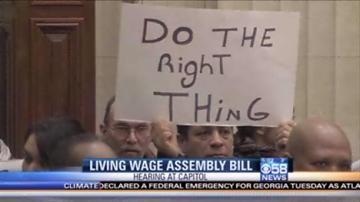 MADISON -- Less than one week after the Milwaukee County Board passsed its living wage ordinance, it is under attack at the state level.

A state assembly bill that would make it illegal for any municipality to pass minimum wage ordinances will get a hearing in Madison Wednesday.

The bill was introduced by State Representative Chris Kapenga (R-Delafield) and co-sponsored by Senator Glenn Grothman.

If passed, the bill would ban ordinances like the one voted on by the Milwaukee County Board last week that raised the minimum wage for thousands of county workers to $11.32 an hour.

Opponents of the bill, incudling County Executive Chris Abele, maintain that state and federal governments should set minimum wages and that increases should not come as a cost to taxpayers.