As war breaks out in Europe, China blames the US 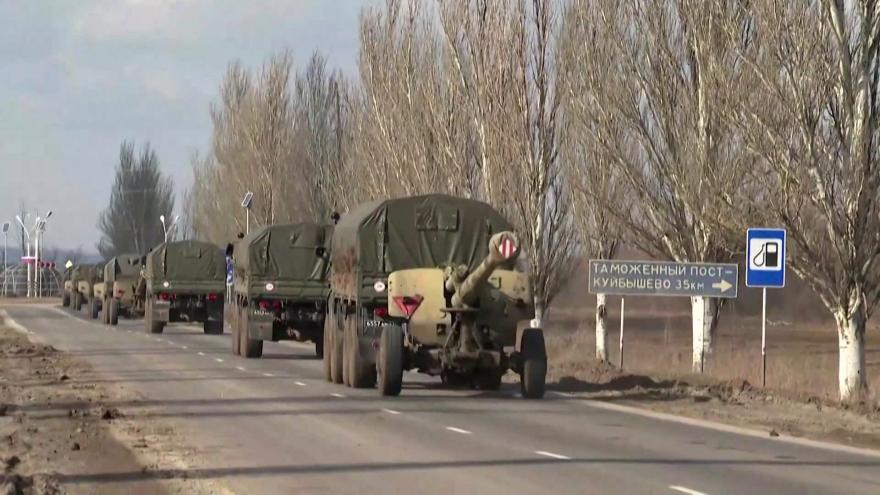 (CNN) -- As Russian missiles flew through the Ukrainian sky Thursday and world leaders decried an invasion spreading across the country, China refused to condemn Russia's move outright, while appearing to levy blame on the United States and its allies.

Beijing finds itself in a complex position as Russia's invasion of its neighbor intensifies, needing to balance a close strategic partnership with Moscow with its seemingly contradictory policy of supporting state sovereignty.

A Chinese government official Thursday sidestepped questions over whether it would condemn Russia's actions or consider it an "invasion."

Instead, China's Assistant Foreign Minister Hua Chunying -- who repeated staid lines about seeking peace through dialogue and said the situation was "not what we would hope to see" -- was quick to point the finger at the US, implying that Washington was a "culprit" for "fanning up flames," referring to US warnings in recent weeks of an imminent invasion.

"China has taken a responsible attitude and persuaded all parties not to escalate tensions or incite war...Those who follow the US' lead in fanning up flames and then shifting the blame onto others are truly irresponsible," she said.

The comments echoed those made a day earlier, prior to the invasion, when Hua blamed the crisis on "NATO expansion eastward all the way to Russia's doorstep."

"Did it ever think about the consequences of pushing a big country to the wall?" she said.

The presence of Hua at the briefing both days was itself unusual, as the veteran spokeswoman had not been at the podium in such briefings since she was promoted to assistant minister for foreign affairs in October.

Her comments were widely disseminated across China's official state media and social media platforms, where talk of Ukraine dominated coverage and conversation.

'War is not funny'

But while state media reflected the official government line, top trending topics on Weibo, China's Twitter-like platform, included a speech by Russian President Vladimir Putin with more than 360 million views, as well as others looking at how Ukrainian citizens were reacting, such as a post on people lining up to donate blood with 62 million views.

The topic "Ukraine President says Western countries completely give up on Ukraine," topped the list in the morning, raking up over 1 billion views throughout the day and tens of thousands of comments.

Many of those comments on the highly moderated platform mocked Ukraine and its President Volodymyr Zelensky for being "pro-West" and cheered for Russia and Putin.

But others pushed back: "War is not funny at all," wrote one user, whose post was liked over 60,000 times. "It makes me feel physically sick to see all the jokes about war."

Elsewhere online, homepages of China's major state media outlets took a measured approach, citing statements and news from both the Ukrainian and Russian side, while putting focus on sanctions leveraged by other countries against Russia.

Communist Party mouthpiece the People's Daily highlighted comments from China's Foreign Ministry pointing to how the US had been "increasing tensions and hyping up war."

A glimpse of the kind of guidance that state media may be under emerged Tuesday, when what appeared to be an internal memo from Chinese state media Beijing News directing its employees not to publish news reports "negative to Russia or pro-West" was mistakenly published on the outlet's official social media account.

A relationship with 'no limits'

The Russian invasion comes on the heels of a meeting earlier this month between Chinese leader Xi Jinping and Putin, who made a show of their strong bond with a highly publicized meeting ahead of the Beijing Olympics and declared "no limits" to their relationship.

But an outright backing of Russian moves would put China at odds with the West. It would also contradict China's usual vocal support for state sovereignty and territorial integrity.

In a phone conversation between China's Foreign Minister Wang Yi and his Russian counterpart Sergei Lavrov Thursday, Wang expressed understanding for Russia's "legitimate concerns" on security issues, but said "China always respects all countries' sovereignty and territorial integrity," according to a statement by China's Foreign Ministry, which did not say what time the call occurred.

China has denied that it was complicit in Russia's moves, but Western leaders are paying close attention to the Moscow-Beijing relationship as events in Ukraine unfold.

As Australian Prime Minister Scott Morrison unveiled new sanctions against Russia Friday, he said he was "concerned at the lack of a strong response from China."

Morrison said China's move to begin importing Russian wheat -- based on an agreement made earlier this month -- was "unacceptable" as Australia, the US, Europe, the United Kingdom and Japan acted "to cut off" Russia.

China hit back at the West's decision to slap a swath of economic sanctions on Russia in recent days. In her comments Wednesday, Hua pointed to China's position that sanctions are "never" effective.