As man's mind fades, heart comes to the rescue 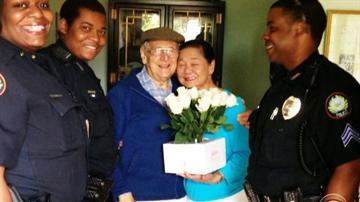 LITTLE ROCK, Ark. (CBS NEWS)-- Remembering 60 years back is hard for anyone, but for Melvyn Amrine, it's especially challenging.

Melvyn was diagnosed with Alzheimer's three years ago. For his wife, Doris, it's been hard to watch. But she says something happened recently to remind her that the man she fell in love with is still here.

\"It's special, because even though the mind doesn't remember everything, the heart remembers,\" Doris says.

It happened the day before Mother's Day, when Melvyn, who normally needs help just walking around the block, turned up missing. Police dispatch in Little Rock, Arkansas, put out the call.

They eventually found him two miles from his house.

Police say they get these calls every once in awhile, of an Alzheimer's patient out wandering aimlessly. But this one was different. When the officers approached Melvyn, they say it was clear: He was a man on a mission.

Sgt. Brian Grigsby and Officer Troy Dillard say even though Melvyn didn't know his address or where he'd come from, he absolutely knew where he was going.

\"He was pretty adamant,\" Dillard says.

\"He wasn't going home until he got those flowers,\" says Grigsby. \"That's what he wanted. He wanted flowers for his wife, because tomorrow was Mother's Day.\"

Melvyn had bought flowers for his wife every Mother's Day since the birth of their first child, and he wasn't going to disappoint her now.

So, after telling dispatch they were taking the man right home, the officers secretly stopped by the grocery store. Surveillance video shows them helping Melvyn pick out the flowers. And when Melvyn came up short at the register, one of them slipped the cashier the difference.

Meanwhile, back home, a very worried wife was about to get the gift of a lifetime.

\"As he came up those steps, and I saw those roses and the smile on his face, I just broke inside,\" Doris says. \"I just said, 'Thank you, thank you.' Because I saw his heart.\"