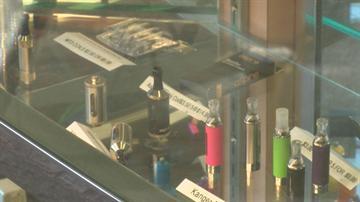 About two dozen high school students were caught on campus with electronic cigarettes.  In one case a student was using the device to smoke marijuana.

\"Calls to the parents had about half the parents aware of it, the fact that  their children had it,\" Jefson said.  \"The other half were not aware of it.\"

The district had an anti-tobacco policy for years, but nothing on the books to  deal with e-cigs, until the school board approved an addition last week.

\"The ability for people to use them and us not to be aware of what might be  used and if it's an illegal activity, obviously we should be proactive in our  measures here,\" Jefson said.

The new policy prohibits students and adults from the use, possession, distribution and sale of e-cigs on all school property.

The Bay View vapor shop co-owner rode the fence about the school's decision.

\"If it's interfering with class... You know, if they're outside doing it or on  their own time, I think that's up to the parents to make a decision,\" Giles said.

Giles says some parents do buy e-cigs for their kids, but he doesn't allow anyone in that's under 18.

\"We're not looking to go find more reasons to harass kids and make issues out of this,\" Jefson said.  \"I think it was more of the concern that these things could be used in a way that could be detrimental to the people on this campus.\"

Arrowhead Union is kind of a front runner on this policy.  In doing his research, the superintendent told CBS-58 News many districts in the state don't have a way to deal with this issue yet.  The school's policy goes into effect immediately.