Arrests made in Racine shooting 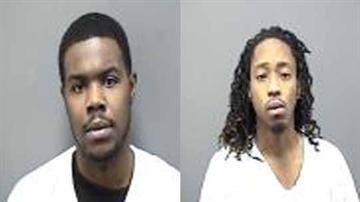 RACINE---Police have arrested two suspects involved in a shooting that happened in the 800 block of 10th and Center Street on Friday, December 13, 2013, at approximately 2:15 p.m. where bullets from that shooting penetrated an unoccupied classroom at Walden School and a home in the area. Police say no one was injured at the school but there were three shooting victims in or near the home, two 21-year-old males and one 31-year-old male.

They have identified 21-year-old Eric D. Robinson as a suspect and arrested him for attempted homicide. 24-year-old Cornelius Stewart was also arrested for Possession of a short-barreled shotgun. Reportedly, Stewart fired back after being shot at by Robinson. Pellets from his shotgun penetrated the school.

When police made contact with persons at the home, they say the victims had been involved in an argument earlier while walking from the store at 10th and Center. Later, while at the residence, the individuals who they argued with drove by and continued shouting at them. The operator of the vehicle made a quick U-turn in the road way, and as it sped past the house, fired rounds in the direction of the group. The vehicle then fled the scene.

People with additional information in this incident are urged to call the Racine Police Department Investigations Unit at 262-635-7756. Or contact Crimestoppers at 262-636-9330, or by texting RACS plus the message to CRIMES (274637) and referring to Tipsoft I.D. #TIP417 with your text message.