Army vet attacked while on motorcycle 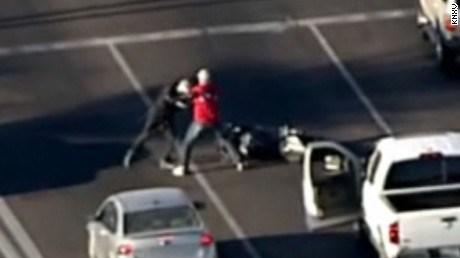 (CNN) A tense moment was caught on camera when a U.S. Army veteran on a motorcycle was attacked while waiting at a stoplight.

The altercation that unfolded in the streets of Mesa, Arizona, on Thursday all started when a suspect led police on a car chase. Brandon Jenkins was stopped at a red light when the suspect came at him from behind.

The 31-year-old suspect, who was fleeing from police, was driving a stolen white pickup truck when he approached the congested intersection. The suspect jumped out of the truck and attacked Jenkins, trying to steal the motorcycle, according to CNN affiliate KNXV.

"I had instincts that kicked in, and where I've been in life I learned to defend myself," Jenkins told KNXV.

Jenkins, a combat veteran, fought back until police arrived on the scene.

"One minute this dude is trying to rip me off my bike and I'm trying to fight him," Jenkins said. "And then I see two cops pull up and draw their firearms."

The fistfight with Jenkins didn't slow the suspect down. The man jumped back into the truck and ran over the vet's GSX 600 motorcycle.

The suspect continued to lead police on a chase for another half-hour before officers caused the truck to crash. The suspect is being treated at a hospital. Police say he is facing multiple charges.

Jenkins said he's lucky he wasn't injured. At one point, he even told himself to let the bike go.

"Just take a step back, let them take it," he said. "You can replace your vehicle, you can't replace your life."

His bike was badly damaged. The veteran told KNXV that this bike was special to him because he bought it after his tour in Afghanistan.

"It's kind of been my baby," Jenkins said. "It was kind of the last piece of my deployment that I spent my money on."

The community rallied behind the Army veteran, and on Saturday he learned that Kawasaki will be giving him a brand-new motorcycle.