Apple Hints at a Foldable IPhone Once Again 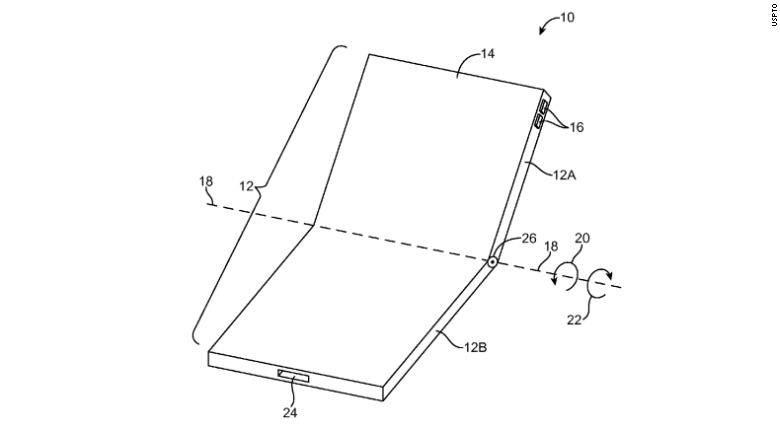 (CNN) --Apple may be nostalgic for the bygone days of the flip phone.

Apple (AAPL, Tech30) has been granted a patent for a flexible iPhone that can fold in half and grip your clothes. This would potentially cut down on the need to stuff devices into pockets.

While Apple often files for patents for technology that never see the light of day, it often provides a glimpse into what the company is thinking for the future.

The patent for "flexible display devices" -- which was filed in July 2014 -- features a touchscreen smartphone with a design popularized by clamshell phones.

The patent highlights how screens featuring a flexible OLED display could bend to face each other or fit back-to-back. Additional hinges could accommodate different ways of folding the phone, too. For example, it could bend in thirds instead.

It's unlikely we'll see a foldable iPhone anytime soon, but flexible screens are in the realm of possibility -- and this isn't the first time Apple has shown interest in them.

Earlier this month, Apple was granted its first patent for a foldable flip phone -- one that opened and closed like a notebook. Instead of a screen, the patent described how "carbon nanotubes" could bend to form the center hinge. Meanwhile, it was awarded a patent for a flexible screen in 2016. It detailed flexible components on an iPhone-like device that could withstand bending, warping or dropping.

Following complaints of faulty flexing phones dubbed "Bendgate," Apple may be looking for a way to improve the durability of its hardware and better conform to our back pockets.

Other recent Apple patents include a 360-degree screen that wraps entirely around a phone and smart glasses to rival Google's failed Glass product.

Although the patent for the latest flexible display illustrates how it could be used with a phone, the language references any "electronic device."

It's unknown as of now if there is an iPhone flip phone in the works, but there's certainly an interest in the old school category.

In May, Motorola released a flip phone Razr teaser video, which was viewed online more than 6 million in its first week.