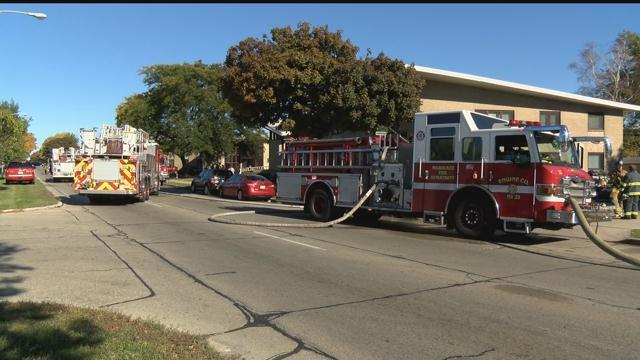 Black smoke pushed its way through a Milwaukee apartment complex Sunday morning displacing dozens of renters in the process.

It happened at the Imperial Apartments on Appleton Avenue during what's already been a high volume weekend for firefighters and the Red Cross.

At 10 a.m. about sixty residents watched firefighters work while waiting next to a parked city bus. Some of them say they didn't have any time to think before they were evacuated.

"At 7 a.m. this morning, I was just laying in the bed and smoke came through the doors. So basically the fire department knocked on all of our doors to let us know that we had to exit the building," Joclyca Nelson said.

"You couldn't see nothing in the hallways. It was real smokey," Nelson said.

"They basically said the fire started downstairs which was set by someone, from what I know," Nelson said.

Authorities have not confirmed details about this possible arson investigation and Milwaukee Fire Department Deputy Chief Terry Lintonen would not yet comment on what may have started the fire.

"We did send a full assignment to the building and we extinguished what was at that time a basement fire. Subsequent to that we got additional calls for fire in this building and it looks like we got a little bit of fire that got up into the pipe chases and we had fire between the first and second floors of this building," Deputy Chief Lintonen said.

"It's been a very busy weekend for us. We've responded to probably upwards of ten fires," Luther said.

"We try to make sure that we have teams that get refreshed so we're not using the same volunteers and staff over and over again. So we try to monitor that," Luther said.

Families who are unable to live at the apartment because of the extensive smoke damage will be put up in a hotel by the Red Cross for the next few nights, Luther said.