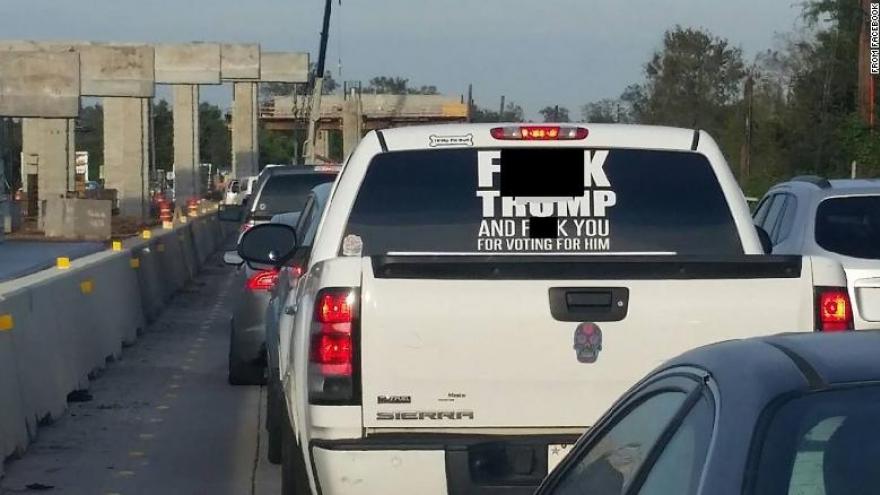 (CNN) They say everything's bigger in Texas, and that apparently includes truck decals.

A Texas sheriff on Wednesday suggested criminal charges are possible for the owner of a white truck that bears a profane message for President Donald Trump and his supporters, sparking a debate about the line between obscene words and freedom of speech.

"F*** TRUMP AND F*** YOU FOR VOTING FOR HIM" reads the decal in bold white letters. A hand with a middle finger extended sits in the middle of the decal.

In a post on Facebook, Fort Bend County Sheriff Troy E. Nehls said he had received numerous calls about the offending sticker. The truck is often seen along FM 359, a state highway near Richmond, Nehls wrote.

He asked for tips on the identity of the truck's owner and said he would "like to discuss it" with the owner.

"Our Prosecutor has informed us she would accept Disorderly Conduct charges regarding it, but I feel we could come to an agreement regarding a modification to it," Nehls wrote.

In the comments, Nehls also had posted the legal definition of disorderly conduct in Texas.

A disorderly conduct charge targets a person who intentionally "uses abusive indecent, profane, or vulgar language in a public place" or "makes an offensive gesture or display in a public place" that "tends to incite an immediate breach of the peace."

The Facebook post sparked an intense discussion among commenters, with a number of them suggesting the First Amendment protected the phrase.

"You have a problem with political speech? Great. Resign, and spend your days trying to amend the Constitution. In the meantime, the first amendment is clear, and you are in the wrong," Jason Weinman wrote.

Another commenter, Linzi Bee, wrote, "I've seen this truck, and I would (be) pleased if the owner of this vehicle was prosecuted for disorderly conduct. My children saw this, and I was infuriated they were subjected to this offensive display."

The American Civil Liberties Union of Texas asked the truck owner to contact the organization and offered the sheriff a free legal tip.

"Constitutional Law 101: You can't ban speech just because it has "[email protected]" in it," the group wrote.

Profanity is sometimes, but not always, protected under the First Amendment's right to free speech.

In 1942, the US Supreme Court ruled in Chaplinsky v. New Hampshire that certain "fighting words," which would tend to incite violence, are not protected under the First Amendment.

However, in the 1971 case of Cohen v. California, the high court overturned the conviction of a man who wore a jacket in a courtroom with the words "F*** the draft." The 5-4 ruling found those words would not immediately incite violence and should be considered protected political speech.