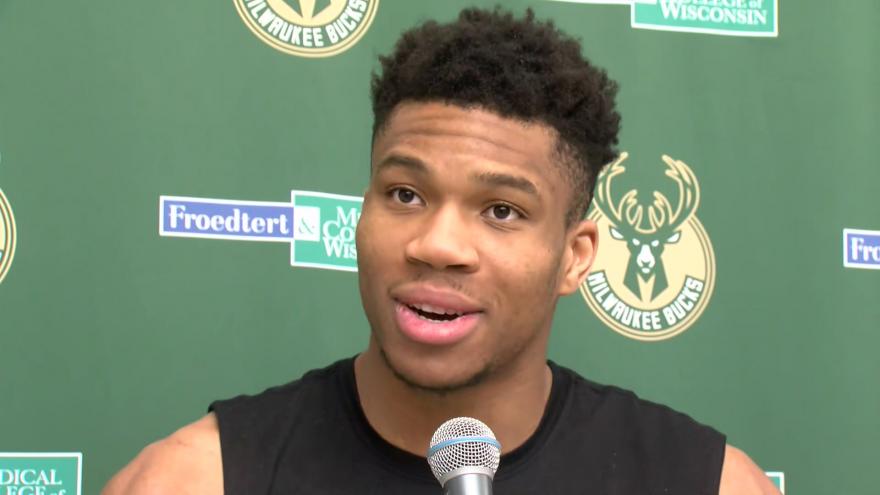 LOS ANGELES (CBS 58) -- The Antetokounmpo brothers are now the second trio of siblings ever to share an NBA floor during competition. It happened during a 112-97 Milwaukee Bucks victory over the Los Angeles Lakers Wednesday night, March 31.

Kostas, Thanasis and Giannis took the floor at the same time for 52 seconds late in the fourth quarter of Wednesday night's game.

Thanasis plays notable minutes for the Bucks alongside his brother Giannis while Kostas Antetokounmpo is a reserve bench player with Los Angeles.

The trio met postgame on the court for some hugs and laughs in a heartwarming viral conversation between the brothers.

Giannis expressed how memorable the moment was for the close-knit brothers in his postgame press conference.

“You can never have a feeling like this,” Giannis said. “This moment, seeing the guys I grew up with, we slept in the same bed, we were looking at the ceiling and just wondering if we were ever going to play in the NBA, to be on the court and have our mother watching and videotaping...I think this is the best moment I’ve ever had in the NBA.”

While the 52 seconds of family basketball wasn't he most exciting of the game, some sibling rivalry happened after Giannis checked out of the game after five simultaneous possessions for the three brothers.

At the 1:01 mark of the fourth quarter, Thanasis knocked in a step-back three-pointer over his little brother, Kostas, that drew some fun reactions from the brothers.

The Antetokounmpos are just the second trio of NBA brothers to play in a game at the same time. Current Bucks guard Jrue Holiday and his brothers, Justin and Aaron, did it in a December 2019 game when Jrue was a member of the New Orleans Pelicans and his brothers took the court for the Indiana Pacers.

The Bucks continue their west coast road trip against the Trailblazers in Portland on Friday night.